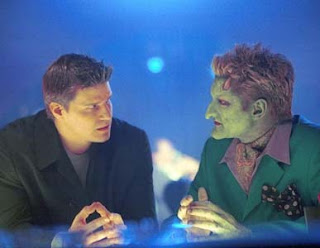 Above, David Boreanaz and Andy Hallett.

I generally don't watch television these days except for news programs. But during the past 15 years, the only two shows I made a point to watch were Buffy The Vampire Slayer and its spin-off, Angel.

Sad news has been announced. Actor/musician Andy Hallett, who played Lorne, the green-skinned night-clubbing demon on Angel passed away Sunday of heart failure at Cedars-Sinai Medical Center in Los Angeles. He was 33.

Apparently, Hallett suffered from heart problems the past several years.

Hallett's character, Lorne, assisted the detective agency run by vampire Angel (David Boreanaz) whose mission was to root out demonic and other supernatural threats to the world. The Lorne character added much levity to the show.