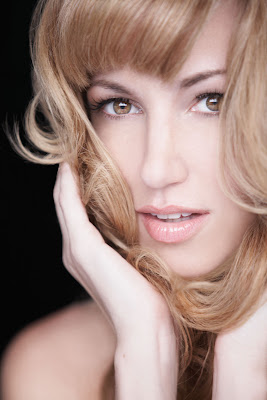 When you are a writer you sometimes discover, through research, that there is a story inside a story, something that is as interesting as the item that you set out to write about in the first place. Such is the case with singer, composer and now actress, Deborah Gibson. Originally I set out to write about her upcoming appearance in the movie "Mega Shark vs Giant Octopus" as kind of a lark. In doing research for my interview, I discovered that there was something else, something that plays a big part in the entertainment industry, perception.

Perception, as I stated above, plays a huge part in determining which film will strike gold at the box office and which celebrities will have long lasting careers. These perceptions are formulated in many ways. Movie trailers give potential audiences there first glimpses of upcoming films. Tabloids and news articles shape our views about celebrities. What I came to find out is, sometimes these formulated perceptions are false.

When you mention the name Deborah Gibson, most people think of an 80s pop star, who had a string of top-40 hits, who faded away, only to re-emerge in the pages of Playboy magazine a decade later and who is now trying to break into acting in some B movie. To be honest, that's the spin I put on her in an earlier article.

That was before I researched her career, and actually got to communicate with her. After that, my perception of Deborah Gibson was changed. I gained a brand-new respect for her. Unlike so many young vocalists and actors before her, when the records stopped selling, she turned her talents to Broadway and establishing a camp for nurturing budding young talent, instead of wallowing in pity, turning to drugs, or in some cases, starring in raunchy adult films. Indeed, it is unwise to try and stamp the "washed-up" label on Deborah Gibson.

In her first attempt at playing the lead role in a film, Deborah gambled on a film, which she thought wouldn't draw much attention, however, like many of her prior career moves, the gamble has paid off in a major way.

KH - First off, I think that the first question anyone would ask would be, "Why Mega Shark vs. Giant Octopus?" You would think that someone with a re-surging singing career and numerous Broadway credits under her belt would aim for a higher end film. Are you a fan of these kinds of films?

DG - I am a fan of having fun! I have a warped sense of humor and love kitch and camp so, I thought? Why not? Get my feet wet (no pun intended) in film by doing a little under the radar film.....little did I know!

DG - I was an extra in Ghostbusters at age 12! I was always a believer in getting as much experience as possible and I still believe that. I played a wacky wedding photographer in one film, a Jewish bride in another. I am always the character actress and this was a chance to be bad ass leading lady. Do I wish I could re shoot a lot of it? Um - yeah! But, I learned a lot....for the sequel!

KH - How hard is it to make the transition from signing to acting? Does doing music videos help somewhat?

DG - Music videos are so different. I am in my comfort zone. I am very animated so I am working on trying to be more understated in film. It is hard for me as a theater gal! But, you can afford to be a bit larger than life when acting opposite a shark!

KH - How hard is the transition from stage to film?

DG - Have I transitioned? (lol)

KH - Tell us about your Emma MacNeil character in Mega Shark vs Giant Octopus?

DG - Emma is a scientist who thinks outside the box and will stop at nothing to save the planet!

KH - Over the past couple of weeks the publicity for the film has just really taken off, it's kinda becoming another "Snakes on a Plane", what do you think the film is getting so much buzz?

DG - It is just so ridiculously funny! I think people wanna laugh. They wanna make fun and have fun. I totally get it

KH - This really couldn't be a complete interview without touching on your past (present) singing career. Now, I'm old enough to remember when you first came on the scene back in the late 80s. I remember an TV interview you did, where you essentially sat at a keyboard and wrote a song right there on the spot. Has composing music always been as easy as that looked for you?

DG - I believe that writers channel. I wrote many of my hits in real time. I sat at the piano and they basically wrote themselves

KH - Many celebrities and vocalists, who begin their career at an early age, as you did, often struggle to make it in the industry as an adult. You have managed to transition from pop star, to Broadway, to kinda a second coming. How were you able to succeed where so many have failed?

DG - I stay versatile and open. I don't strategize to the point that I miss opportunities. Is this film my best acting showcase? No. But, my website has gotten a gazillion hits and people can see that last month I was in Quebec performing for 12,000 people or they can youtube my Broadway stuff......I stay out there and working and enjoying myself. I believe if you are in the game long enough, the wheel comes back around! The trick is not to second guess when and how that will happen. Just do the projects you believe in or you think you will have fun with and the rest falls into place!

KH - I have to admit when I hear the name Debbie Gibson (or Deborah Gibson) I still get a mental picture=2 0of you from one of your videos, in your PJs running through the hanging laundry on the beach. Is there always struggle to get past that kind of way people see you?

DG - That is your issue, not mine! Ask your therapist but I am pretty sure it has something to do with not being able to get past your own adolescence! I am kidding! Well, half kidding! If I spent my time trying to make people form some other image of me I would never get any classic shark movies made! I leave how people perceive me up to them.

KH - That leads me to my next point, and you knew it was coming, I regards to your photos in Playboy magazine, a lot of fans were really surprised by that. Many would assume that the decision to pose naked was the ultimate attempt to erase the "teen-pop-star" stigma forever. What really was the motivation?

DG - It wasn't. People definitely have stock perceptions. They think that is every one's motivation. It is easier to put everyone in the same box. Why do people skydive? Why do people change careers in their adult life? So many people do crazier things than to pose for a men's magazine. Again - I am very simple. It sounded fun and exciting and creative and also, I knew I would have fun with people like Howard Stern....I like things that make me slightly nervous and make other people slightly uncomfortable! And, with that said - I am never bored which is the coolest thing about being me.

KH - Tell us about "Camp Electric Youth". Will you be doing another one?

DG - Yes! I am doing a summer camp in July. www.DeborahGibsonsElectricYouth.com has all the info. It is so amazing to see a kid walk in who is insecure in school, at home..... They will say "I have an idea for a song but it is not very good" Cut to, months later, they have finished it, recorded it, and performed it in Hollywood onstage in front of their family, friends, peers, and celebs. That has been what I have witnessed this year in so many kids. I am just the facilitator.... I just sit back and watch and chime in when need be to encourage, support, and shape. It is magical.

KH - Now that Mega Shark vs Giant Octopus has created some buzz do you think that it will lead to more roles? Are you looking to do more films?

DG - I would love to do more for sure! And, have more than a week's notice and 3 weeks to shoot! I think I need to do a movie musical in this lifetime for sure.... I am mainly focused on my music right now though, which reflects where I am in my life. I am so happy, comfortable in my own skin, in tune with what is relevant, but with no desire to be 23 years old. I look at women like Tina and Cher and love that they have always owned their uniqueness and age and stand for empowerment

KH - What's up next? Is there another album on the horizon? An upcoming tour?

DG - Definitely an album and I would love to tour and eventually land in a Vegas showroom where I can connect the dots of my career and perform my old hits, hits that are forthcoming, and Broadway material.

KH - I always give the people an opportunity to leave with a personal message to their fans. What do you want to tell them?

DG - I have super loyal fans who have defended me to the death when need be and have embraced my sense of humor and my artistic path and for that I am humbled and thankful!