Why The Funny Face? Behind The Scenes With Shannon McDonough 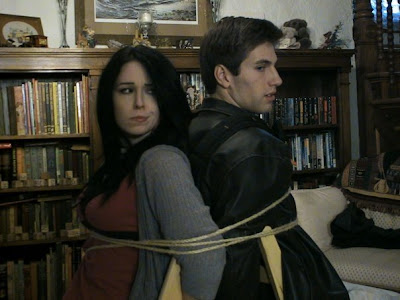 Just about everyone has had dreams of becoming an actor. A desire to leave their hard working lives to bask in "the good life", "the easy life." How hard could it be right? Well as actress, Shannon McDonough can attest, it can sometimes be very hard and uncomfortable, and sometimes very very cold.

Shannon was kind enough to let us into her world to get an idea just what it was like to be on the set of two of her latest films.

Now, I'm not trying to say that acting in a movie is anything like digging a ditch for living, but being on a film set can have its hard moments to. For example, try remembering your lines while being tied to a chair in a freezing cold room, such was the case on the set of "Thieves Like Us."

Shannon tells us a little about the film, "Thieves is about 2- well -thieves, Toby and Mark. Mark is a plumber by day, scoping out houses for them to rob later and then sell the stolen merchandise on a website. Just as Toby is about to go straight and marry his long time girlfriend, Lindsey, Mark gets kidnapped and Toby is blackmailed into one last heist. Lindsey discovers Toby's secret and follows him to the job to try to stop him. They're both caught, held hostage and awesome fight scenes and comedy ensues :)"

Okay, so being tied up in a cold house doesn't sound to bad, well try being a dead body in a cold pool. Your body can adjust to the temperature of the water if you move around, but if your playing a corpse, you don't really a chance to move around much.

Here Shannon tells us about "Death Perception" and how she ended up an aqua-stiff.

"Death Perception was a short I did for the 48 Hour Film Festival which was shot in 3D. As far as I was told, no one else in the Twin Cities has ever filmed in 3D before, so that was pretty rockin'. It was a detective murder mystery in which I played a "lady of the night", showgirl Honey B. Devine. My fellow showgirls are turning up dead and she's next. The short included a shot of me, face down, dead in a VERY cold swimming pool. We made it into the "Best Of Minneapolis 2009" for the Festival, now to see how it does on it's festival circuit...."

Shannon was also kind enough to tell us about her part in Christopher Mihm's latest film "Destination: Outer Space', complete with spoilers!

"I recorded my lines for the next Saint Euphoria feature: Destination: Outer Space! Julie Ann passes away before Professor Jackson builds a spaceship for their son. He misses her so much that he makes her voice the voice of the ship."

Sometimes being a young actress isn't all wine and roses, sometimes it's voice-overs, rope and cold swimming pools. 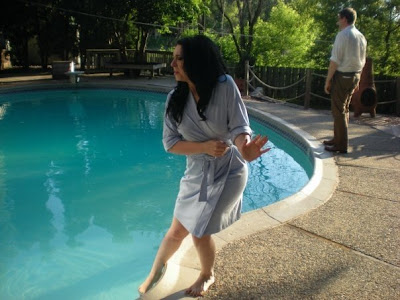 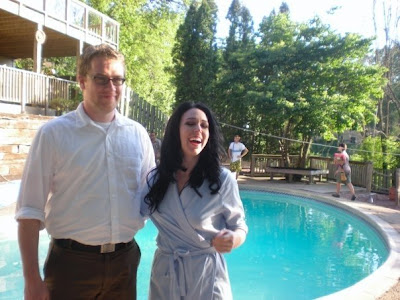