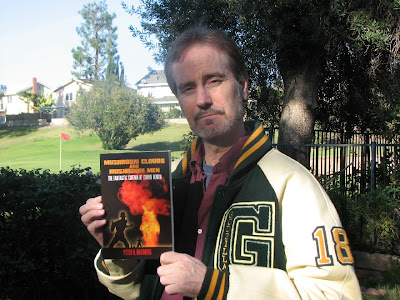 Above, author Peter H. Brothers with his new "baby" in his back yard.

Getting together with friends is a good thing. Celebrating a friend's new book made it even better.

Peter H. Brothers has a new book out. It's called Mushroom Clouds and Mushroom Men: The Fantastic Cinema of Ishiro Honda. It is a biography/filmography of the most celebrated director of Japanese science-fiction and fantasy films, Ishiro Honda.

Today, several of us gathered at Peter's home in Agoura Hills, California for a little celebration of his book's "going live" (i.e., offered on the market) through his publisher, AuthorHouse and through Amazon.com (see photos).

We discussed the trials and tribulations (and joys) of getting a book out into print. Originally, Peter's book was accepted by a publisher, but their schedule was too lackadaisical for Peter's taste (he discusses all this at-length in an upcoming G-FAN interview). Rather than let things languish, he elected to go the self-publishing route. 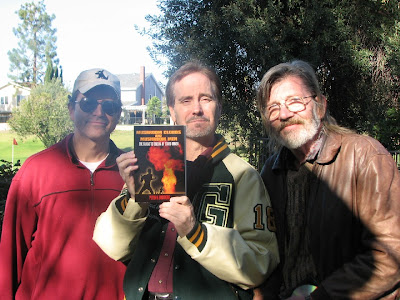 Above, Peter is joined by friends Gordon (left) and Ray.

To be honest, although he would have preferred to have gone through a conventional publisher, he is pleased at the end result. The book does look good and, it is being offered at Amazon.com. The arrangement offered him more control over the resulting product. So, as far as he's concerned, he's satisfied that his years of work is seeing the light of day. 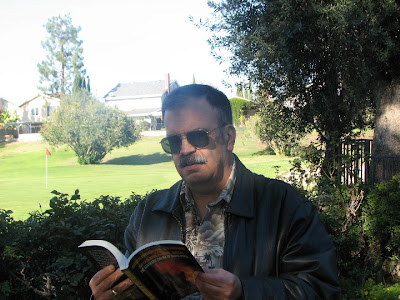 Above, I was impressed with the job AuthorHouse did on Peter's book.

While there, I showed the group the initial layouts and cover of The Monster Movie Fan's Guide To Japan and they were complimentary.

Peter and I may join forces at next year's Monsterpalooza in Burbank and have a table set up to sell our publications.

Now the task of promoting it begins!
By Armand Vaquer at November 14, 2009