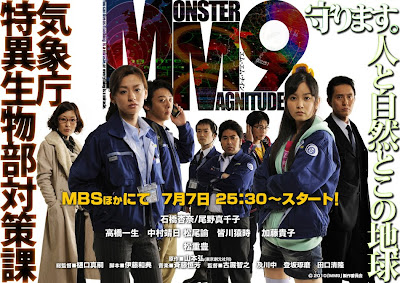 The series will take place in an alternate universe, where Japan is constantly attacked by monsters. MM9 is a special unit of Japan Meteorological Agency who's job it is to predict the arrival of these monsters in very much the same way that the National Weather Service predicts rain and snow.

When the monsters do show up, and you know that they will in every episode, a team of monster specialists called “Kitokutai” are dispatched to combat them. Only one problem, these specialists are not from the military, so they don't have any weapons. The group will have to rely on their skills, knowledge, and experience to prevent the monsters from reducing Japan to toothpicks.

That's a new twist! You would think that a group that specializes in dealing with 200ft tall creatures would get a maser tank or two......or at least a bazooka or something?

"MM9" also has a great list of directors lined up, including Tomoyuki Furumaya, Kiyotaka Taguchi and Ataru Oikawa. So far all of the shows episodes have been written by Kazunori Ito (Patlabor, Gamera).

Back on April 1st, posted a fake message, that hinted that this show was coming, about a new series called, "XX9". The post featured the cast of "MM9" dressed in sci fi costumes with futuristic weapons.

"MM9" is set to premiere July 7th on the Mainichi Broadcasting System (MBS).

Why can't we get any great shows like this here in America?

See Also: New Images And Video From "Daimajin Kanon" / In The Absence Of Godzilla, Japan Has Had A Real Giant Monster Boom!
By Ken Hulsey at May 27, 2010