"Destroy All Planets 2010": The Case of the Missing DVD 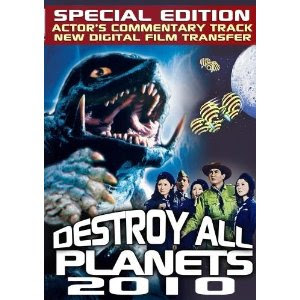 "Destroy All Planets 2010": The Case of the Missing DVD

An alert fan discovered today that the Retromedia DVD, Destroy All Planets 2010 has "mysteriously vanished" from Amazon.com's website.

No doubt this may be due to the issues Ryan Clark and other fans raised pertaining to the rights issue at Amazon.com and several kaiju-oriented message boards.

This is probably a cautionary move on Amazon.com's part until the rights issues are resolved.

UPDATE: The DVD is still being offered at Amazon.com.

FOR THE RECORD: Kaiju historian August Ragone commented on several message boards about the rights issues. I had quoted him as he has the most knowledge on Japanese movie companies, DVD & screening rights and many other facets. As his comments are on several public message boards, I took the liberty in quoting him. Unfortunately, I should have given him a "head's up" first. It was not my intention to box him into the fray which may give someone the impression that this was an "August vs. Retromedia" situation. It wasn't. He also expressed that he'd like to also hear what Carl Craig has to say in his commentary. He was only speaking as a fan and not in any official (or otherwise) capacity with his role in Shout! Factory's Gamera releases. I apologize if that is the impression given.
By Armand Vaquer at June 29, 2010