Creature From The Black Lagoon And Star Wars Figures On A Shelf ... Is It Art? 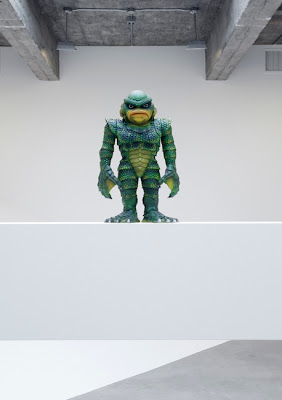 Okay, I am probably the last guy on Earth that should be writing a piece about modern art. Honestly, the whole thing escapes me. All it looks like to me is stuff any five-year-old could make displayed in a way that's supposed to make some kind of statement about something thought provoking.

Case in point is a new exhibit at the Tanya Bonakdar Gallery in New York by Haim Steinbach entitled "Creature". The main inspiration for the series of works on display was a "Creature From The Black Lagoon" action figure which Steinbach turned into a piece of modern art by placing it on a long white shelf angled across the corner of a room. Does it make sense to me? No. Do I like the subject matter? Absolutely! Who doesn't like the Creature? On top of that I like alot of the stuff Steinbach has arranged on shelves, a giant Stormtrooper and a Darth Vader action figure from Star Wars, nude female sculptures and the kind of nic-nacs my mother-in-law buys at yard sales.

Well, I guess so and after delving into this article I have come to realize that it is just Americana and pop culture simplified.

Ah alas I guess Steinbach has gotten to me. 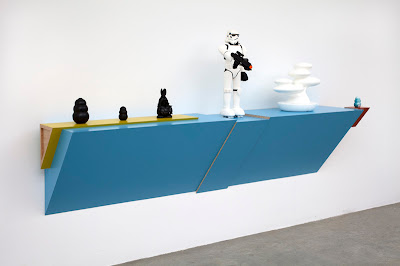