The Monstrous Movie Clip Of The Day: "Quit Steaming Up My Tail!"

One thing that I try to do here at Monster Island News is showcase all forms of ultra-cool entertainment, be that movies, TV shows or music. One genre that has been lacking as of late has been animation, namely cartoons. Being a child of the 70s I was raised on what I consider to be the "Golden Age" of cartoon animation, which in my mind is anything produced between 1930 and 1980. Granted one could argue that a second such golden age took place in the early 1990s with all the great television shows and films produced by Disney that were produced in that all too brief window.

I can't argue against that point, there were some really great toons from that time.

That being said, I generally turn on modern cartoon programs and throw up in my mouth a little.

Actually to convey a secret, Bugs is actually the one character that I have based the core of my personality and sense of humor on. I know it should be Jesus ... or Charlton Heston ... or someone like that but in actuality it is an animated Wabbit. Of course this should come to no surprise to anyone who knows me well. I actually quote the carrot chomping one under my breath and actually make asides to an imaginary audience that isn't actually there.

So today I kinda picked a cartoon out of a hat due to the simple fact that there are far too many great Bugs Bunny cartoons to make a selection of just one.

So you get "Bully for Bugs" today. 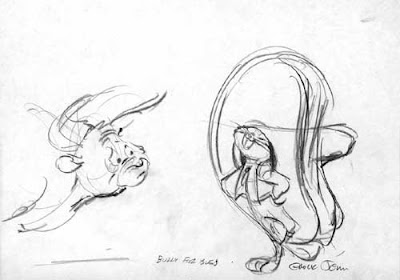 Bully for Bugs is a 1952 Warner Brothers Looney Tunes theatrical cartoon short released in August 1953. It was directed by Chuck Jones and written by Michael Maltese.

In his biography Chuck Amuck Chuck Jones claims that he made this cartoon after producer Eddie Selzer burst into Jones' workspace one day and announced, for no readily apparent reason, that bullfights were not funny, and they were not to make a cartoon about them. Since Selzer had, in Jones' opinion, consistently proven himself to be wrong about absolutely everything (having once barred Jones from doing any cartoons featuring Pepé Le Pew, on the grounds that he perceived them as not being funny, which led to Jones and Maltese to do For Scent-imental Reasons, which won an Oscar, which Selzer accepted), the only possible option was to make the cartoon. The sounds of the crowd are recorded from a genuine bull-fighting crowd in Barcelona, Spain. The boulder to the face gag was reused from Rabbit Punch which was also directed by Chuck Jones five years earlier.

Despite the fact that it has carrots, some fans have come to the conclusion that Bugs' reason for his journey to the carrot festival was to celebrate Cinco de Mayo (though the release date for this cartoon was in August). It should also be noted that while the Coachella Valley is a major agricultural region which grows some carrots, it does not hold an annual carrot festival. The immediate area's carrot growing region is outside of the valley in the Imperial County town of Holtville which does in fact hold an annual carrot festival.