Wanna Know How To Fix The US Economy? I Have The Answer! 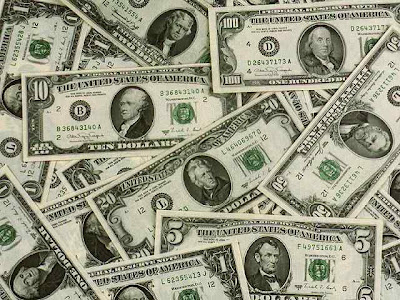 Now that the Senate has voted down the $700 billion bail-out plan to help save the American economy, I have better idea how that money could be used to stimulate spending and put everything back on coarse. Take that money and give it to the American consumer. You heard that right! give it to the people instead of giving it to big business! According to some numbers I've heard being tossed about, that would end up being something around $300 thousand per taxpayer. I know that if I got that kind of money, I would use it to buy a house and pay off my dept. If everyone did this, then the housing market would boom again, and businesses would see a sharp increase in sales and profits......problem solved right!

Despite what the "fat-cats" in Washington think, the only real way to stimulate an economy is to get people spending again, not by lining the pockets of "big-business"

I know this is an over-simplified solution to a complex problem, but I think it would work. I doubt anyone in government would have the smarts or balls to put such a plan into action.

Americans who in jeopardy of loosing their homes would now be able to keep them and pay them off!

The plan would allow the Federal Government, plus the State and Local Government, to get an almost immediate payback on some of the funds through sales and property taxes. This tax money is crucial to the well-being of states like California and others who are working under a deficit and are planning to take more tax money out of your pocket to offset these negative balances. (A plan that will hinder the economy even more...) The Federal Government could even be allowed to take a smaller than standard amount out for income taxes. There should be a cap on this however to keep the money in the hands of the taxpayer, or else the plan wouldn't work.

As it stands right now, the government is gambling that they will be able to get their money back from the bail-out from the very same type of investments that caused most lending institutions to go belly-up.
By Ken Hulsey at September 29, 2008