Planet of the Apes Behind the Scenes Photos and Trivia 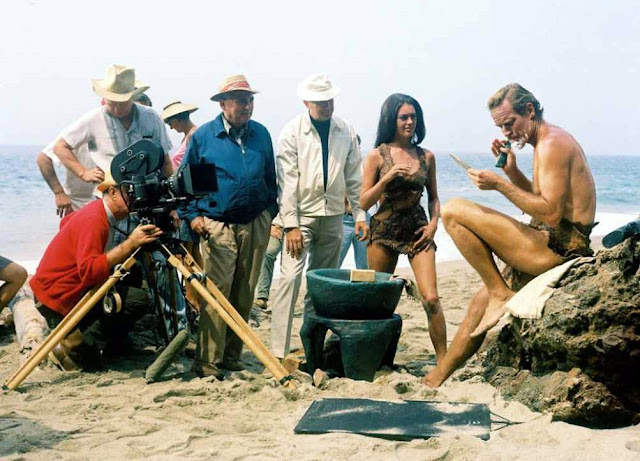 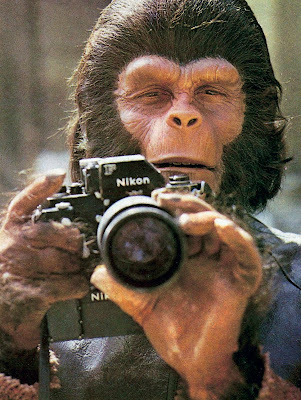 Planet of the Apes Trivia:

Roddy McDowall, an experienced actor, recommended to his companions in makeup that they should frequently add tics, blinks and assorted facial gestures to add a sense of realism and keep the makeup from appearing "mask-like". McDowall reportedly became a merry prankster with the makeup, driving home with his make-up on, and shocking some of the other drivers on the freeway.

McDowall also appeared on an episode of The Carol Burnett Show wearing his Planet of the Apes make-up. The look of fright on Carol Burnett's face was reputed to be genuine.

During breaks in filming, actors made up as different ape species tended to hang out together, gorillas with gorillas, orangutans with orangutans, chimps with chimps. It wasn't required, it just naturally happened. 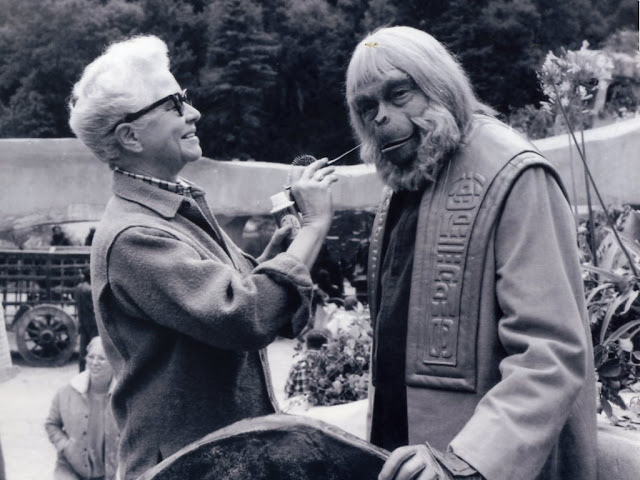 All the Ape actors and extras were required to wear their masks even during breaks and in between shots because it took so much time to make them up. Because of this, meals were liquefied and drunk through straws. 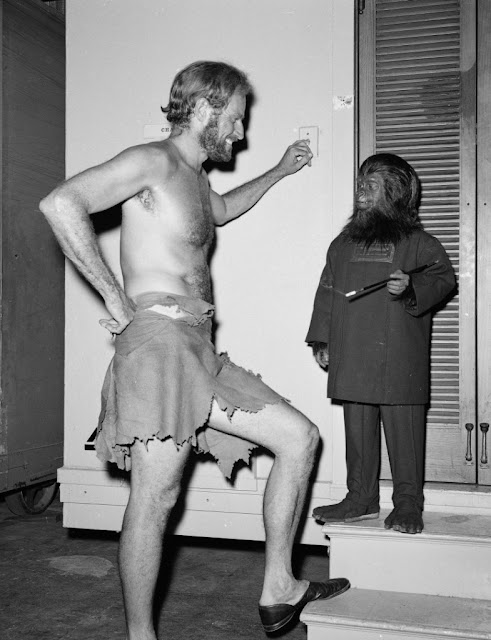 Although Charlton Heston's character is listed in the credits as "George Taylor", the name "George" is never seen or heard in the film. He is referred to only as "Taylor". 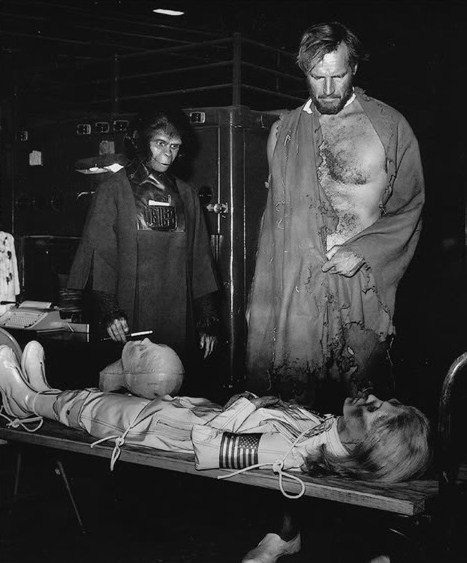 The fourth astronaut Stewart was originally written as a man. 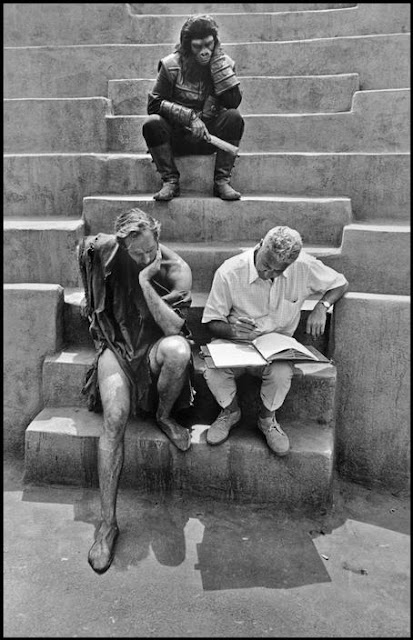 Charlton Heston was sick during much of the film with the flu. Rather than wait for him to get better, the producers felt that his hoarse voice added something to the character of Taylor. According to Heston's diary, after filming the scene where Taylor and Nova are forcibly separated, he wrote that he was feeling like hell while shooting because of his illness, and felt even worse "every time that damn fire hose hit me". 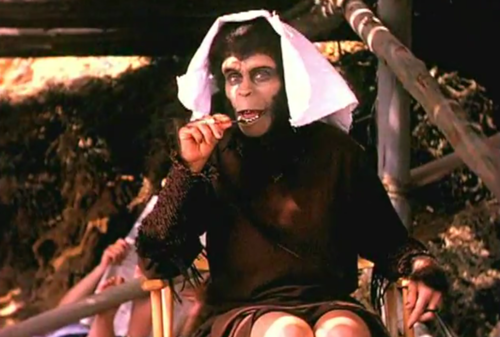 Turning down the part of Zira was one of Ingrid Bergman's greatest regrets. Much surprised at how well the finished film turned out, she later confided to her daughter Isabella Rossellini that in hindsight the film would have been an ideal opportunity for her to "disregard her regal bearing". She also regretted missing the opportunity of working with Charlton Heston. 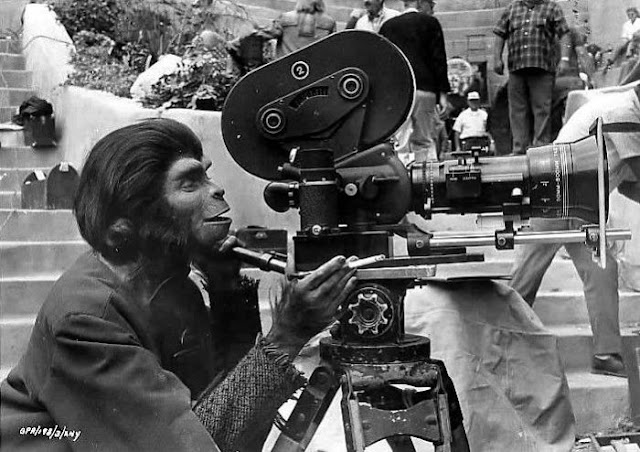 Actress Kim Hunter (Zira) was a political activist, she signed several civil rights petitions and was a sponsor of a 1949 World Peace Conference in New York - which triggered her label of being a Communist sympathizer, for which she was blacklisted in films and TV even though she never even held pro-Communist views. Her testimony to the New York Supreme Court in 1962 against the publishers of "Red Channels" helped pave the way for clearance of many performers unjustly accused of Communist connections. 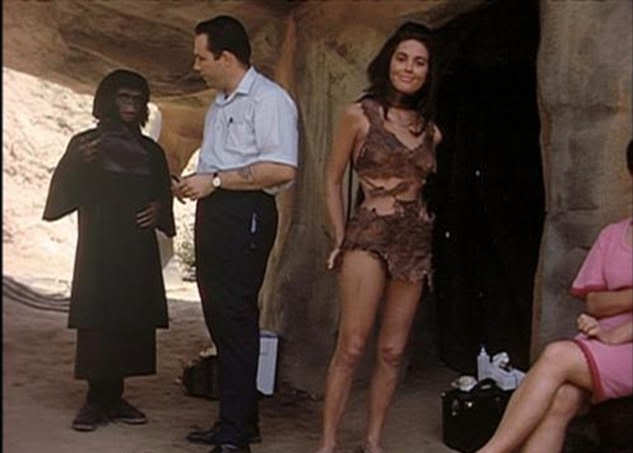 Linda Harrison, who plays Nova, was having an affair with producer Richard D. Zanuck at the time of production. In the year of the film's release, Zanuck divorced his first wife and married Harrison. The couple were married for 9 years and had 2 children. 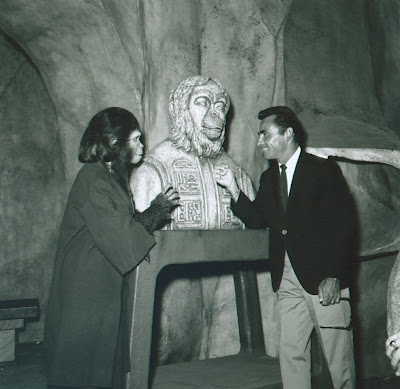 The first director to spot the potential in Pierre Boulle's novel was Blake Edwards. He brought on board leading sci-fi writer Rod Serling who produced nearly 40 drafts of the screenplay. While Serling was able to get to grips with the structure, he gave full credit to Michael G. Wilson for the final screenplay.

The final scene with Taylor coming across the Statue of Liberty was suggested by Rod Serling. According to rumor, Pierre Boulle was greatly upset by this ending, but later warmed to it, preferring this new ending over the very different ending he had written. The skeletal remains of the torch appear as "set decoration" in the final episode of Lost in Space: Junkyard of Space.

John Chambers' outstanding makeup technique pioneered in the film was based upon one technique he had used during World War II to give disfigured veterans a normal appearance. Chambers spent many hours watching the apes at Los Angeles Zoo, studying their facial expressions. Several other productions were delayed due to the fact that many of Hollywood's top make up artists were working on this film. Leftover makeup supplies were later used on actor Michael Conrad, playing an ape-like alien in Lost in Space: Fugitives in Space. The Academy of Motion Picture Arts and Sciences gave Chambers a special award for makeup (which was not an Oscar category until 1981) for this achievement, in the second time that a make-up artist received an Academy Award. [William Tuttle was the first, with 7 Faces of Dr. Lao (1964)]. Chambers' award was presented by Walter Matthau and a chimpanzee in a tuxedo. 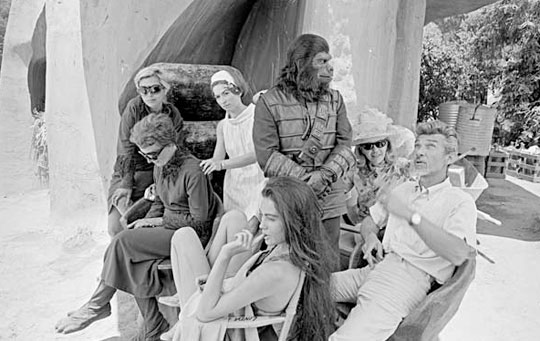 Although it is widely believed that the budget for the ape make-up was at a million dollars, Assoc Producer Mort Abrahams later revealed via interview that the make-up was "more like half a million...but a million dollars (quote) made better publicity". Abrahams was certainly qualified to know, since his function was more as the active Line Producer through Planet of the Apes & Beneath the Planet of the Apes. 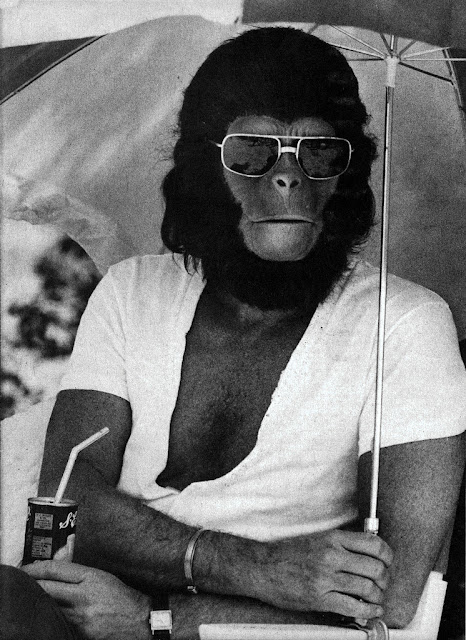 In December of 1998 The Academy of Motion Picture Arts and Sciences (AMPAS) honored Roddy McDowall for his acting career and critically acclaimed photography by naming its photo archive after him. The collection, which includes several million negatives and stills, will be known as the Roddy McDowall Photograph Archive at the Margaret Herrick Library. 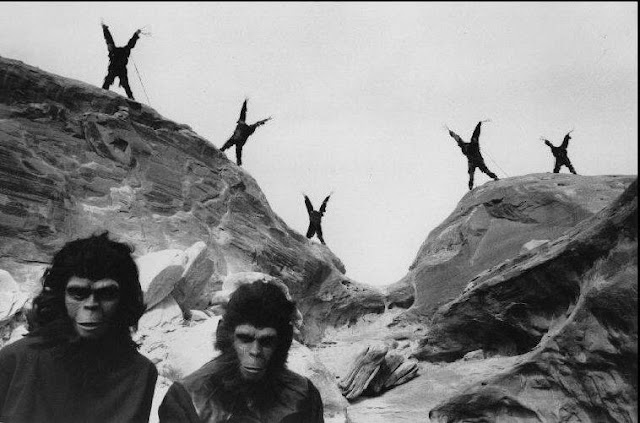 Early in the movie during the establishing shots when the crew are marching through the desert through to the Forbidden Zone, a panoramic shot of the surrounding canyons shows a man next to an automobile in the distance. 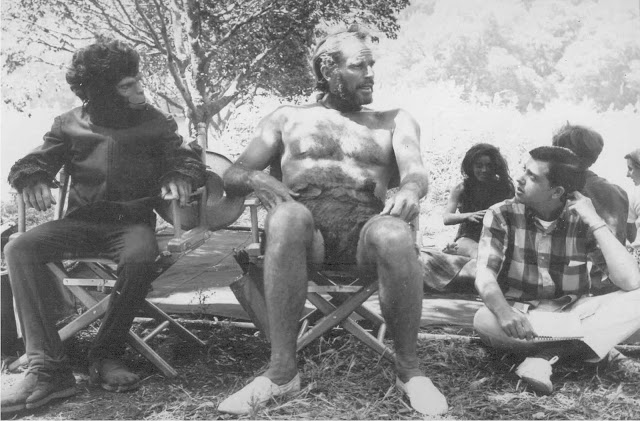 Shortly after the astronauts have crash landed Taylor is asked where he thinks they are, having no idea he sarcastically responds, "We're some 320 light years from Earth on an unnamed planet in orbit around a star in the constellation of Orion." In the original novel the story takes place on a planet in orbit around the star Betelgeuse, which is in the constellation of Orion. 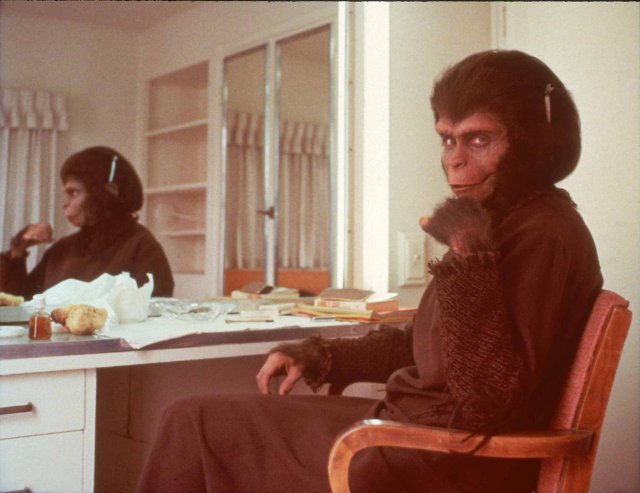 The filming location of the classic final scene has been erroneously thought to be Cabo San Lucas, Mexico, but is in fact Malibu, California. For die-hard fans who want to visit the true location, it is a secluded cove on the far eastern end of Westward Beach, between Zuma Beach and Point Dume. Ignore the wide curving beach by the car park and clamber over the rocks to the east until you get to the quiet, often deserted, little beach surrounded by cliffs. (The Statue of Liberty was an optical effect skillfully achieved with a matte painting blended into a still existing rock
structure.)