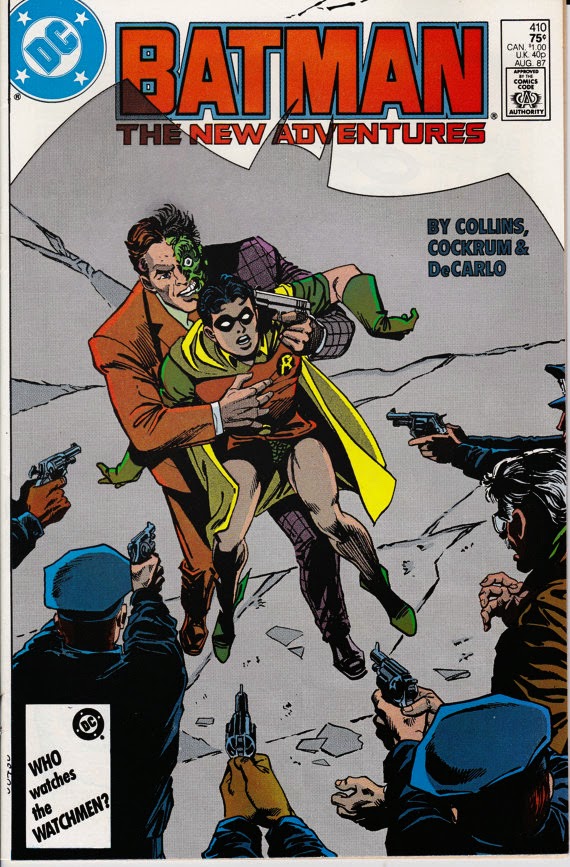 This comic book is in new condition. Comic is complete with cover and all pages attached. This comic has some flaws that warrant a NM grade.

After six months of intense training, Batman presents Jason Todd with a Robin costume, anointing the teen Batman’s new partner, much to the chagrin of Alfred. When the new dynamic duo answer the Batsignal, Commissioner Gordon meets the new Robin then shows the heroes an envelope that was delivered earlier that day. Inside is a poker hand consisting of two pair and a deuce and four photographs of two pair of petty criminal twins. Noticing it as the M.O. of the villain Two-Face, Batman and Robin travel across the “Bi-State” Bridge to the Lucky Dollar Casino in Casino City. Encountering the former district attorney, the heroes disable Two-Face’s henchmen, but the duo is unable to prevent the villain from taking a hostage. Playing on his penchant for “twos”, Robin offers himself up in place of the hostage, stating that it is fitting seeing as how he is the second Robin. Two-Face agrees and speeds off with his new hostage, but the new Teen Wonder frees himself from the villain’s grasp. Back at the Batcave, Jason discovers that Two-Face is presumably responsible for the death of Willis Todd, Jason’s father.
By Ken Hulsey at April 13, 2015