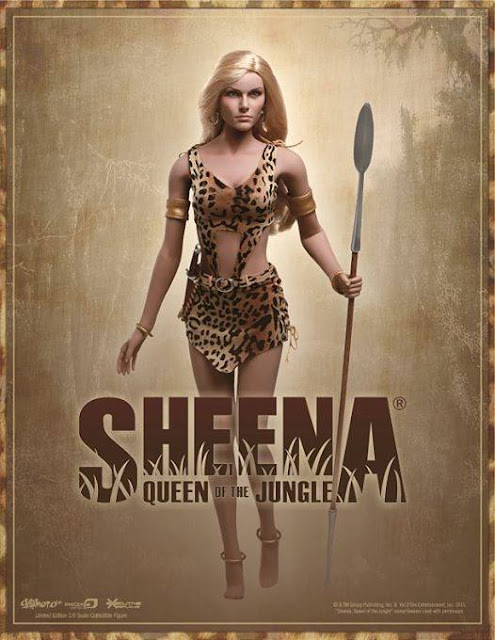 Go Hero, Executive Replicas, and Phicen Ltd are proud to present this first-ever figure of the original Queen of the Jungle, Sheena! Made with a Phicen 1:6 scale seamless poseable body, this Sheena Queen of the Jungle 1:6 Scale Action Figure features a detailed head sculpt of the character, rooted hair, and tailored leopard print mono-kini with skirt. Sheena also comes with a wealth of accessories, including hoop earrings, bracelets, anklets, arm bands, a belt with buckle, and she even comes with a knife, a sheath for the knife, and a spear! Sheena includes 3 sets of hands, an action figure stand, and high-grade specialty packaging!

Originally conceived to be a counterpart to Burroughs' Tarzan, Sheena leapt off the pages of Fiction House comics in 1937 to become the very first female character to have her own title, four years before Wonder Woman. Since then, Sheena has been featured in comics, graphic novels, TV shows, and her own feature film. Although there have been many imitators, there will only ever be one jungle queen.