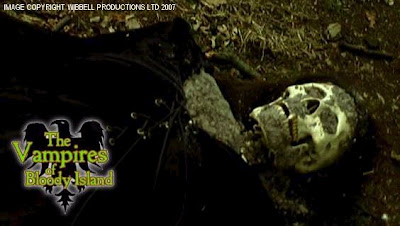 With a very clear identity right from the start, the new label is set to specifically target cult, horror and science fiction feature films (or so called B-movies), short film compilations and some 'very odd' special interest documentaries.

"Wibbell are the new weird kids in town! We're the freaks, the nerds, the geeks and the weirdoes. We're the travelling freak show and the vampires castle! We're seriously into the so-called 'cult' or 'B-Movie' areas of Horror, Sci-Fi and Nostalgia, as are our huge potential audiences here in the UK and around the world. The followers of these genres care about them passionately and have an insatiable appetite for quality genre films. We at Wibbell aim to supply those films!

We also want to unearth some of the enormous new film-making talent that is emerging on the independent scene outside of the established film industry. We know through our own experience as film-makers ourselves that there are many great independent films that just can't punch through the Hollywood stranglehold on the worlds film markets. We aim to find the best of those films within the ‘cult’ genres and help get them out in front of the audiences they so richly deserve."

'The Weird World of Wibbell' launches this Summer with the UK release of their first film title, the jaw-droppingly funny independent British Vampire Comedy "The Vampires of Bloody Island", already being hailed by the press as 'a new cult classic' and ‘doing for vampire films what 'Shaun of the Dead' did for zombies!’

"The Vampires of Bloody Island" stars up and coming 'Scream Queen' Pamela Kempthorne as the evil and scheming vampiress Morticia de'Ath. The film is set on an abandoned island off the Cornish coast which has become home for demons and vampires, and also stars Oliver Gray, John Snelling and Leon Hamilton.

The soundtrack to the film includes songs by such giants of the Goth-Rock scene as The Suburban Vamps (from the USA), Theatres des Vampires (from Italy), Fever (from Portugal) and Britain's Premier Pagan Rock band, Inkubus Sukkubus - all names which are very familiar to their enormous international fan bases in the Goth music scene.

Following "The Vampires of Bloody Island", 'The Weird World of Wibbell' has a catalogue of several other DVD releases scheduled for over the next 12 months, showcasing the work of new emerging directors in the cult/horror/sci-fi genres, plus some very old nostalgic treats.

Releases will be initially in the UK and Irish markets while Wibbell forges relationships to release their titles world-wide.

Allin Kempthorne concludes "We aim to establish 'The Weird World of Wibbell' as a new name in weirdness for British B-Movie enthusiasts. We welcome interaction with our audience and have an active newsletter group which we encourage everyone to join on our website at www.wibbell.co.uk
By Ken Hulsey at May 23, 2008