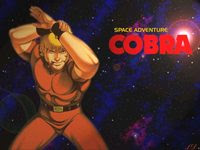 It was announced today that the popular 80s anime series, "Cobra" will return to Japanese television this fall. The series, which first aired in 1983, was spawned from the hugely popular manga that was first published in 1978, and has sold over 30 million copies to date. The comic book series was so popular that it was also turned into a full-length animated film in 1982. The television series then followed a year later.

In celebration of the comics 30th anniversary, a brand new series of “Cobra” will be released on DVD Aug 29th, to be followed by the start of the “Cobra” TV series soon after. That's right, you can buy it on DVD before it even airs on television.

The new series will feature both hand-drawn and computer generated animation, but fans of the original comics and TV series won't have to worry about the CG overshadowing the traditional anime. Buichi Terasawa, the author and director, explains, “Animation is a good way to keep the original image of the comic. The hand-drawn look is an essential reason for the popularity of Japanese cartoons. Although we use computer graphics, we like to emphasise the hand-drawn method.”

One thing I should point out to American fans, is the fact that although the series is called "Cobra", and it was made in the 80s', it has nothing at all to do with "GI Joe." "Cobra" is actually about the adventures of a space pirate, not some Green Barret wannabees.
By Ken Hulsey at June 26, 2008