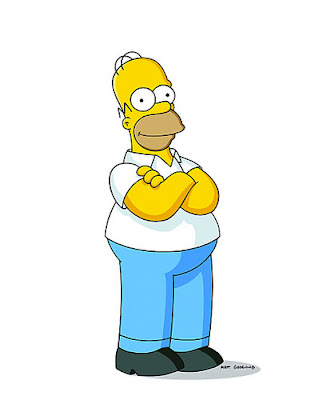 HOMER SIMPSON is a simple man. A man who through punishing trial and error has proven that even one’s loftiest goals are attainable—provided you set them low enough. Homer is well versed in the ins and outs of his job at the Springfield Nuclear Power Plant, having innumerable times been fired and rehired for the same position. Despite the fact that Homer is often the lumpen gristle stuck in the cogs of Mr. Burns’ money-crazed machinations, Mr. Burns can never remember Homer’s name.

Homer is also stuck in the middle of a classic generational parenting cycle. Having been constantly corrected and belittled by his father, Homer strives to be supportive of his own family by smothering them with indifference and vague endearments. As a result, Lisa feels left out, Bart acts out, and, as far as Homer is concerned, Maggie rarely even exists. Yet Homer deeply loves and is intensely devoted to his wife and kids, when it occurs to him. When Marge refuses to go scrounging at the dump, Homer promises to bring her back something nice. In fact, Homer spends as much time as possible singing Marge’s praises between rounds of beer at Moe’s Tavern. Now, if only he could remember the words to that praise song.

Moe’s Tavern is Homer’s homely home away from home; a place where he will be greeted with open arms by both well and ill-wishers alike, as long as he’s buying, which is seldom; a place where he can relax, scratch himself with his keys, blow his nose on his shirt, and drink glass after glass of sweet, sweet beer. A place where, after a few drinks and a pickled egg or two, anything seems possible, even his hare-brained get-rich-quick schemes. After all, life is too short to get rich slow.