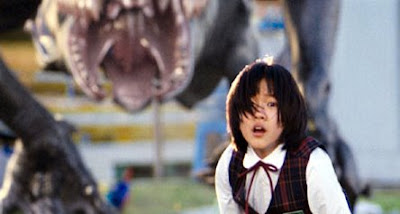 The original film that was directed by Bong Joon-Ho was a huge hit in Korea, and has gained a following in the UK and US due to a limited theatrical release and brisk DVD sales.

Honestly, "The Host" is one of the better giant monster films to be produced in the past thirty or so years. Fans can only hope that Bond approaches the project with the maturity and sensibilities that Joon-Ho exhibited when making the original. 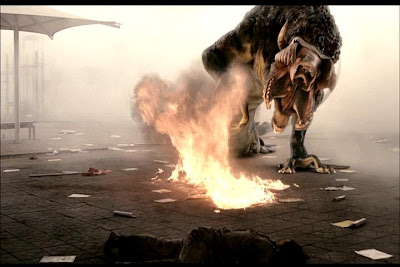 Gang-du (SONG Kang-ho) works at a food-stand on the banks of the Han River. Dozing on the job, he is awakened by his daughter, Hyun-seo ( KO A-sung), who is angry with him for missing a teacher-parent meeting at school. As Gang-du walks out to the riverbank with a delivery, he notices that a large crowd of people has gathered, taking pictures and talking about something hanging from the Han River Bridge. The otherwise idyllic landscape turns suddenly to bedlam when a terrifying creature climbs up onto the riverbank and begins to crush and eat people. Gang-du and his daughter run for their lives but suddenly the thing grabs Hyun-seo and disappears back into the river. The government announces that the thing apparently is the Host of an unidentified virus. Having feared the worst, Gang-du receives a phone call from his daughter who is frightened, but very much alive. Gang-du makes plans to infiltrate the forbidden zone near the Han River to rescue his daughter from the clutches of the horrifying Host…

See Also: The Host (2006) / The Top Ten Greatest Giant Monsters Of All Time / Yet Another Korean Monster Film Goes Into Production / Korean Monster Sequels Slated For 2009
By Ken Hulsey at November 19, 2008