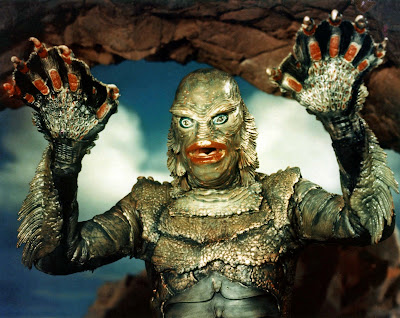 Above - close up shot, from Ben Chapman's collection of the special color publicity costume made at Universal, with touches of red & the red lips. Note also the stomach plates are darker than the film costume. - Cortlandt Hull

Yesterday I posted a set of rare photos that were taken for a never published article on the movie, "Creature From The Black Lagoon" by Life Magazine. I read an article on the origin of the photos that stated that the pictures had been taken on location during filming. After examining the photos I came to the conclusion that the images were probably publicity shots taken after the fact. (See The Photos Here)

I decided to try and get to the bottom of the true origin of the photos, so I contacted Cortlandt Hull, a documentary film maker and owner of the "The Witch's Dungeon Classic Movie Museum" . I knew that Cortlandt had developed a long relationship with both Ben Chapman and Julie Adams, plus he had created a "life-sized" statue of the "Creature". I figured that if anyone could get me the facts on these photos it would be him.

Cortlandt was kind enough to take time out of his busy schedule, condensing about a zillion hours worth of interviews and film footage down to a workable four hours of content for his upcoming documentary ""Legends Of Film & Fantasy", to give me the true story.

Here is a copy of the e-mail Cortlandt sent me, including rare photos from his collection: 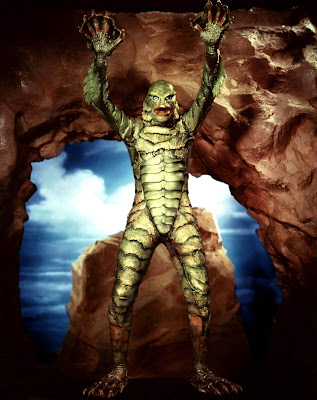 Above - special color costume Ben spoke about, created for publicity photos by Universal,with red lips & touches of red in the costume.

These "Life Magazine" photos are a great find! But, I only hope these shots won't perpetuate the false notion that the Creatures lips were red! As BEN CHAPMAN told me several years ago, but unfortunately not on camera, a Life cameraman had shot full color photos of him in the special color publicity costume, which Universal had done specifically for their own color publicity shots. Ben always wondered why these photos never appeared in "Life Magazine". Sad, he never lived to see these wonderful shots appear. Just a year ago, we interviewed , actress, JULIE ADAMS for our new "Legends Of Film & Fantasy" documentary, currently in production. Julie stated exactly what Ben said - "The costume in the film was not painted with the vivid shades of the color publicity costume." Julie said - "The colors in the film costume were more muted, various shades of moss green - no red lips!" These photos were not taken during actual production of the film, but to promote the film.

However, there were two units shooting "Creature", which Ben mentioned, on camera in our first documentary, "The Witch's Dungeon 40 Years Of Chills". Ben was with Julie Adams, Richard Carlson, Richard Denning etc. all shooting at Universal's back lot "lagoon" which is what you see in these "Life" photos. It was only the underwater shots, and some establishing shots of the lagoon area, which were shot at "Wakulla Springs" in Florida, which is now a state park. Ricou Browning, although he did all the early tests in the costume at Universal, with
"Creature" creators, Jack Kevan & Chris Mueller, was only seen in underwater footage completely shot in Florida, with Ginger Stanley, doubling for Julie Adams, and other doubles for the underwater stunts. Then the footage was matched with what the cast had shot at Unversal's back lot. Ricou also explained this when we interviewed him.

(Above) are two shots, which were in Ben's personal collection, which he allowed us to scan, of the special color publicity costume. These shots have been seen before, but probably not as clear, as these were originals that Ben had. You can see this is the costume that Ben was wearing in the Life Magazine photos. The other shot (Below), of the costume hanging up at Universal's makeup department in 1971, I took myself, when John Chambers showed it to me. This is an actual color photo of the film costume Ben wore, not the publicity costume. Ben verified this for me, when I showed him my photo. - Cortlandt Hull 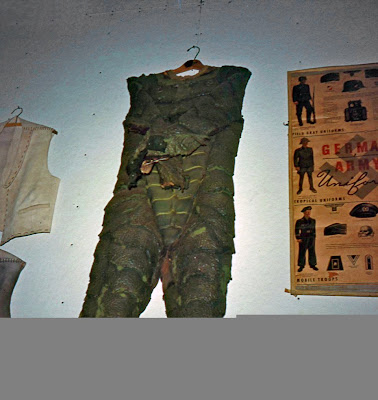 Above - photo of the original film costume Ben Chapman wore, not the publicity costume, taken at Universal's makeup department in 1971... 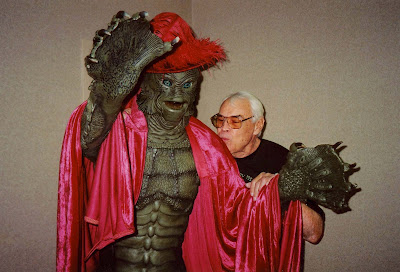 Above - BEN CHAPMAN having fun with our Creature figure. We were packing up for a show, he put the cape & hat of our Chaney "Red Death" on our Creature and said - "Now he's "The Phantom Of The Black Lagoon"! Ben was so much fun! We miss him. 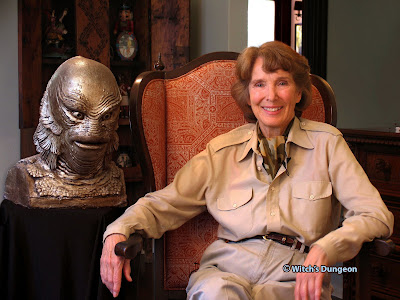 Here is a shot of Julie Adams from our interview with her in our new documentary -the bust is from the museum collection, made from the original mold used for Ben Chapman's Creature head piece.