The Day The Earth Stood Still - About The Production 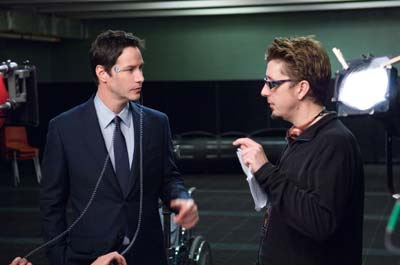 Director Scott Derrickson's stylistic approach to the making of THE DAY THE EARTH STOOD STILL was informed by the example set by filmmaker Robert Wise, who directed the original film. "One of things I've always respected about Robert Wise is that there isn't really a 'Robert Wise style,'" Derrickson says. "He didn't impart his style on a film. He put the story first and then built a style out of that story. For this film, I tried to establish a process with the crew that would create a style that serves the story the best way possible."

This process was led by an intensive collaboration between Derrickson, production designer David Brisbin, director of photography David Tattersall and their talented teams of artists and artisans. Like the science and technology that powers the story, Derrickson and company grounded their design concepts in the real world. "We wanted to make a film that had a stylish look and a distinctive quality in terms of color, lighting and set design, but we didn't want to push the boundaries of reality too far," the director says. "The film is expressionistic and stylish, but we tried to root it in reality so that you don't feel as though you are watching a comic book movie or a graphic novel movie."

The first key step in Derrickson's process of conceptualizing the look of the film was developing a color palette. "He is obsessed with color," says Brisbin, who previously worked with Derrickson on "The Exorcism of Emily Rose." "It's very important to Scott to find a color code for the whole film and be very rigorous about how it's applied. You can have an enormous football stadium set and there'll be one red tomato far on the other side, and he'll say, 'David! What's that red doing there? We don't do red.'"

"I think color is one of the most effective aspects of cinema," Derrickson explains. "When I think of movies I love, the color palette of the film is inextricable from the film itself. I think about 'GoodFellas' and that movie was green and a dark maroon red. 'Taxi Driver' was this kind of dirty taxi yellow color. There's a certain palette control in really good films that becomes part of your memory and what you take away from them in the end."

Derrickson applied a similar discipline to the selection of the color palette for THE DAY THE EARTH STOOD STILL. Together with Brisbin and Tattersall, he compiled an eclectic batch of images for inspiration, and ultimately boiled the collection down to twenty stills that form the tabula rasa for the film. "I don't like too many colors in the frame, and at the same time, I don't like a wash of just one color," says the director. "We went through each scene and talked about controlling and compressing the palette in a way that feels real and yet immerses the audience within these particular colors for the duration of the film so that when it's over, you're left with an indelible impression of what they film looked like."

This yielded a design scheme anchored by one or two colors per set - primarily blue-green and orange - with the rest of each environment bathed in neutral tones. "The Flash Chamber is a good example of how we compressed our palette," says Brisbin, describing the converted missile silo in which Gort, Klaatu's massive bio-mechanical bodyguard, is subjected to a battery of diagnostic tests by military technicians. "Among the twenty images we settled on was a photograph of a gray field with orange lava flowing through it. The orange is very bright, almost livid. We decided that these two colors - gray and orange - would be our 'zone' for the Flash Chamber.

"It's a pretty complicated matrix to hit the color marks that Scott is after and still keep everything looking real," Brisbin elaborates. "The great thing about collaborating with Scott on design and color issues is that he wants to arrive at a very specific and controlled destination, but he wants the process of getting there to be intensely collaborative. That's really as good as it gets for a designer."

Another important facet to achieving the realistic look Derrickson envisioned was in the processing of the film itself. (The director opted to shoot on film, rather than in HD.) "We did a 'pull process,' which has the effect of reducing the contrast slightly," says Tattersall. "It makes the colors a little bit more subtle and pastel-y, if you will. That's a new thing for me."

Self-described film buffs Derrickson and Tattersall spent hours discussing shots, composition and camera movement in determining their shooting style for the film. Rather than apply one particular style to the entire movie, they formulated their visual approach on a scene-by-scene basis, depending on what each moment of the story called for. "Different sequences felt like they needed to be shot differently, so the shooting style changes throughout the film," Derrickson says. "There are some scenes that we shot with long lenses, some scenes that we shot very static and other scenes that were shot with wide lenses and the camera never stops moving. We tried to create symmetry between sequences so the result is a cohesive tapestry of styles within the film."

"Our approach is sort of classic old-school cinematography mixed with a lot of state-of-the-art technology," says Tattersall, who utilized rear-screen projection and painted backdrops in lieu of green screen and CG visual effects whenever possible.

"David Tattersall can bring a set to life like nobody's business," Brisbin attests. "He is a master at lighting, at taking good foreground scenery and a painted background and using old school techniques to give it depth and dimension."

Tattersall's enthusiasm for traditional methods of stagecraft and his expertise at lighting indoor sets standing in for exterior locations played a crucial role in the production. Filming took place in Vancouver, which doubled for New York, in January through March 2007. The difficulties of shooting in Canada in the middle of winter with unpredictable weather - and a script that calls for multiple night exteriors and special effects like snow, fog, wind and rain - prompted the filmmakers to mount some of the exterior scenes on soundstages, ensuring greater control over lighting, blocking and environmental factors.

The incredibly lifelike outdoor settings constructed on stages by Brisbin's art department include a forest, a swamp and a snow-covered mountain ridge. "I depended heavily on my greensmen and my construction team and we were generally able to make things believable," says Brisbin, "but we would not have been able to pull it off if it weren't for our cinematographer. He's a visual genius and a fantastic collaborator." (Like Tattersall, Brisbin has previous experience creating believable night exteriors on interior stages - his first effort was constructing a realistic outdoor campfire setting for a pivotal night scene between Keanu Reeves and River Phoenix in "My Own Private Idaho.")

Weather is a significant factor in the story, all of which had to be manufactured by the special effects department (with CGI enhancements where necessary) and adhere to Derrickson's desire for realism. "What I'm going to remember most about working on THE DAY THE EARTH STOOD STILL is the smell of the fog," Jaden Smith says. "It was horrible."

As part of Twentieth Century Fox parent company News Corp.'s corporate mandate to become a carbon-neutral company by the year 2010, THE DAY THE EARTH STOOD STILL was chosen to be the studio's first green production. "For the first time ever, I found myself working with a studio to find ways of being more efficient in the work we do in the art department and less wasteful," says Brisbin, whose team typically uses "mountains and mountains" of paper in printing, especially location photo stills.

For this production, the art department transitioned to a digital approach, posting photos on a website that could be accessed by other departments as needed, thereby cutting down additional printing and paper waste. Meanwhile, Brisbin's scenic painters, construction crew and set dressers used recyclable materials and biodegradable products whenever possible in the creation of sets and props. When it was necessary to use lumber, it was sourced from sustainably-managed forests.

Costume designer Tish Monaghan's team also adapted from paper printing or taking Polaroids to using digital photography for wardrobe fittings. Efforts were also made to use more environmentally-conscious solvents and dyes, and to recycle garment bags and hangars and other items that are often thrown away after filming. When principal photography wrapped, all of the wardrobe that was purchased for the film (or re-purposed from another show) was either given to Fox to be utilized by future productions, or donated to men's and women's shelters.

Much attention was also focused on fuel efficiency through the use of hybrid vehicles, substituting biodiesel for fossil fuels in the generators, and strict enforcement of the "idle-free mandate" - if any member of the crew found themselves sitting in their production vehicle for more than three minutes, they had to turn off the engine. Energy-efficient appliances were also used to conserve electricity.

"Everybody on the crew dug into it with zealousness," says visual effects producer Jeff Okun of the collective effort. "It's really exciting to be involved in making a movie about saving the world, and at the same time, taking steps to make sure we leave a zero footprint."