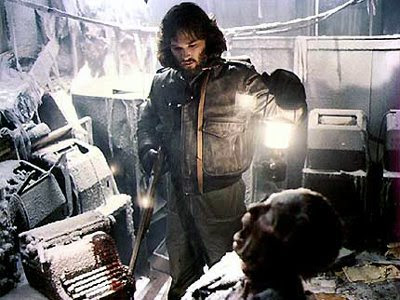 I have to be honest, the plot for the latest remake of "The Thing" (aka: The Thing From Another World), sounds pretty damn lame.

"The Thing", which was originally made in 1951 by Christian Nyby, was brilliantly remade in 1982 by John Carpenter. Film makers essentially have been remaking the film over and over. Lets be honest, "Alien", "Creature", "It! The Terror From Beyond Space" and countless others, are all remakes of "The Thing."

The film's basic premise, a group of people marooned or isolated with a man-killing monster with no possible escape, is a great concept for a truly suspenseful movie, but lets face it, it has been done, and done very well.

It just makes you ask, "why?" We have already seen this film before, why do we need to see it again from another perspective?

Is Hollywood really this tapped for new ideas? Sounds like a real waste of time and money. Am I right?

Here is the plot from Bloody Disgusting:

"In the screenplay by Ronald D. Moore, the prequel takes place from the Norwegian camps point of view. An American scientific expedition to the frozen wastes of the Antarctic is interrupted by a group of seemingly mad Norwegians pursuing and shooting a dog.

The helicopter pursuing the dog crashes leaving no explanation for the chase. During the night, the dog mutates and attacks other dogs in the cage and members of the team that investigate. The team soon realize that an alien life-form with the ability to take over bodies is on the loose and they don't know who may already have been taken over."

It was mentioned that the film is to be a prequel in there, but it still sounds like the 1982 film to me.
By Ken Hulsey at December 24, 2008