An Early Effects Shot From Transmorphers The Fall Of Man

With a brand-new "Transformers" movie coming out this summer, it should be expected that The Asylum would be coming out with their own film 'inspired by' the big-budget Hollywood epic, and indeed they are. The film entitled "Transmorphers: Fall of Man" features everything you would expect, robots that change shape and the like.

Unlike the upcoming "Transformers" movie, "Transmorphers: Fall of Man" is a prequel. The the original "Transmorphers" (2007), takes place 300 years in the future and follows a human rebellion against a race of alien robots who have enslaved the Earth."

"Transmorphers: Fall of Man" takes place in modern times, and follows the story of when the alien robots first land on Earth.The invasion forces mankind underground and the rebellion is formed.

The film stars one of my favorite actors, Bruce Boxleitner, who was the shit on "Babylon 5."

The Asylum was cool enough to send us an early effects shot from the film. In the clip a giant robot is seen firing on a fleeing pick-up truck. A pretty cool sequence!

Fans of giant robot movies and animation may want to give "Transmorphers: Fall of Man" a look! 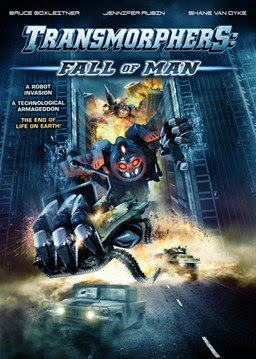 See Also: The Trailer For The Asylum's Terminators / The First Photos From The Land That Time Forgot / Its An Aquatic Monster Free For All In Mega Shark Vs Giant Octopus.....Oh And Debbie Gibson / The Land That Time Forgot Remake Begins Filming / The Trailer For Asylum's Dragonquest / Exclusive Images From Asylum's The Terminators / The Top Ten Hottest Monsters Of 2008 / New Photos From Next Weeks Big Monster Movie Release / Monster (2008)
By Ken Hulsey at April 24, 2009