Mega Shark vs Giant Octopus: How Big Is Too Big? 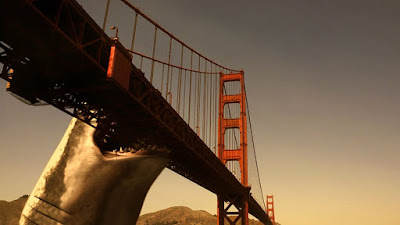 For centuries man has pondered the question, "How big is too big?" Now generally the question has referred to things like houses, cars, boats.....um....women's chests and other material things. Now, however, the question may asked of movie monsters.

Sure, there have been tons of gigantic critters in movies throughout the decades, such as King Kong, Godzilla, Gamera, The giant ants from Them!, Gappa, and Reptilicous. The list goes on and on.

Leave it to the folks over at The Asylum to create two monsters that make all of those monsters look like midgets. Monsters so large that they even eclipse the fame of their cinema co-star, 80s pop sensation, Debbie Gibson. Yes, we are talking huge!

Oh, did I forget to mention that these monsters are a giant octopus and a giant shark, the two nastiest predators in the ocean?

Oh, sure the shark in "Jaws" was big.....and scary, but we are talking about a shark so big that it could rise out of the bay and bite the span of the Golden Gate Bridge.

That sure sounds big! 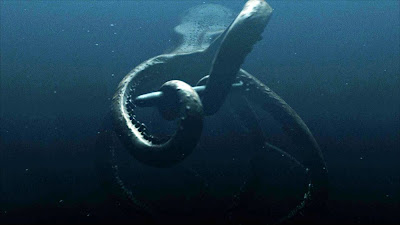 We are talking about an octopus so large that it could munch down a nuclear submarine like it was a Good & Plenty.

Well how big is that you may ask? Well lets do a size comparison. Look at the photo of the shark attacking the sub. Okay, now look at the photo below of Godzilla attacking a submarine. Sorry, the only photo I could find is of a figurine, but it proves my point.

That's one heck of a giant octopus!

Now, here's the question, are these monsters too big? Is there such a thing?

If you like em big, and a lot of people do, then "Mega Shark vs Giant Octopus" should be right up your alley.