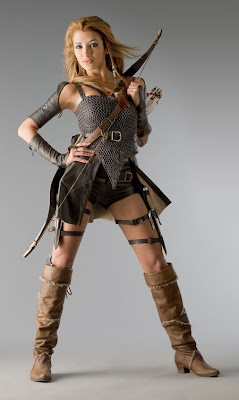 Aneka is in her twenties, a beautiful, libidinous, lithe pagan warrioress, oozing sexuality. Sex is just another weapon in her arsenal. But there is an elephant in the room – her wardrobe. She needs more of it, starting with underpants...

India de Beaufort is a British-born actress, most recently seen in the hit film Run Fatboy Run. She currently divides her time between the UK and Los Angeles, where she is the face of the make-up line designed by one of Hollywood's most sought-after make-up artists, Mezhgan Hussainy, currently Head of the Make-Up Department for American Idol.

India relished the chance to play the very saucy and ballsy role of Aneka, as she explains: "Krod Mandoon is a breath of fresh air; it's an epic comedy mixed with heartfelt moments, and usually someone falling on their arse. The series is set in a fantasy realm where anything's possible. The beauty is that you have the gravitas of Royal Shakespeare Company actors, mixed with the pure comedic genius of our stand-up and improvisational artists, all led by the heroic comedy timing of Sean Maguire."

A singer, songwriter and model as well as a talented actress, India first auditioned for the role of Aneka in August 2008 and fell in love with the script straight away: "Luckily, it was all quite a fast-paced process: literally within a few weeks I was shooting the series."

She soon made the role of Aneka her own, as she explains: "I based her gutsy attitude on the women around me. I grew up surrounded by women that could do anything they set their mind to, my own mum leading by amazing example. She's really petite, only 5' 2" and yet I would come home and find her up a tree cutting down branches, or fixing something around the house, plumbing, painting and DIY at the same time as holding down a job, and raising two lively kids. 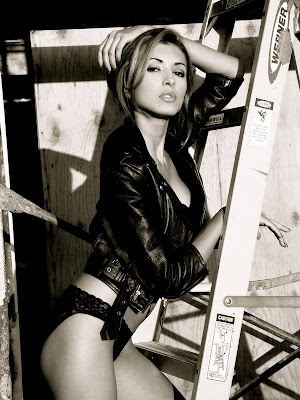 "To this day, she can still take down anyone twice her size with one look and yet she manages to do it all with grace and control and a frighteningly solid foundation. It's an amazing thing to be a woman, especially in this time of equality, with so many opportunities. When I'm playing Aneka, I dig into the stuff I'm made of!"

India continues "Aneka's obvious strengths are her fighting ability, her courage, her gutsy attitude and her intelligence. I think her heart is a great strength, and probably also her weakness. You rarely see her vulnerability, but it's there."

India really enjoyed working with her co-stars and says they all grew very close whilst filming out in Hungary. She is full of admiration for Sean: "He's a leader through and through. He's typically Irish: friendly, big hearted and lovable. Sean's so perfect for the character of Krod. I've never seen anyone work so hard: Sean dedicated 24 hours a day to Krod. If he wasn't on set, he was running lines, or stunt training, or in the gym keeping fit and toned for the role. He never let the ball drop. When Sean's on set, he isn't acting, he's BEING Krod, and that is such a gift for the rest of the cast to work with. He learns the names of every single cast and crew member, he looks after us all, listens to us and keeps everyone going right up until the last scene of the day. I owe Sean a crazy amount, he is a great friend."

She continues: "Matt Lucas brings silliness and laughter to the cast. He's so down to earth and really easy to talk to. Matt actually made my job very hard, because Aneka is most definitely a straight, serious woman and keeping a straight face when he's on set is near impossible."

Filming in Hungary offered all of the cast a unique and exciting opportunity too: "Budapest is a beautiful place, and the Hungarian crew members were so generous and welcoming. The stunt guys even threw us a party with traditional food and music, which was so kind of them. The goulash was amazing! It's great fun to be able to travel to new places, and learn about different cultures."

Although she is currently back and forth to Los Angeles, India's permanent home is in the UK: "I was born and raised in the UK, and that's where my family is. I travel a lot with my job. At the moment I'm working as a spokesmodel for a make-up line in the States, so I spend a lot of time out in LA, but London is my base. At my age I think it's important to take advantage of my career choices and see as much of the world as possible. I find myself never really staying anywhere for too long, but I don't mind saying there's nothing like a chip butty with brown sauce and a cup of tea... and my favorite chippy is at home."
By Ken Hulsey - June 12, 2009