Is There Another Gremlins Movie On The Horizon? 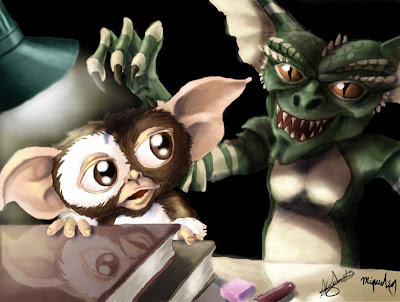 It would only stand to reason with so many movie franchises from the 80s and 90s being resurrected these days, namely "Alien", "Predator" and "Ghostbusters", that eventually someone would turn their eyes once again to "Gremlins". And why not? The first two films were very-good 'family-friendly' monster movies, with cuter-than-cute critters who turn into nasty teenagers.....um, monsters.

What a better marketing idea, than to have store shelves filled with cute Gizmo related merchandise just in time for Christmas.....or Easter.

Now, is there a "Gremlins 3" in our future? Well, that depends on who you talk to.

On one hand you have the director of the original "Gremlins", Joe Dante, who recently told Empire magazine, that he has heard about the film being made:

"I hear they're going to make another one soon. I can see why - it would be stupid to let that title go to waste. The actors from the first two are too old to do a proper sequel, so I'm sure when the new one arrives it will be a remake of the original."

Then there is "Gremlins" creator, Chris Columbus, who swears on a stack of Holy Books, that he don't know nuttin about no new movie!:

"I haven't heard about it. If they do the monsters with CGI, I don't know if it would be the same. They should go back and do it with puppets again, though at this point I wouldn't be interested in being involved."

Now, if there were to be a new "Gremlins" movie in the works, then you would think Chris would be savvy to it. Then again maybe he knows stuff he can't talk about.

I think that both parties are on to something though. If there is going to be a new film, it will probably be a remake, and if said remake is made, it will, sadly, feature CGI critters instead of lovable puppets.
By Ken Hulsey at July 31, 2009