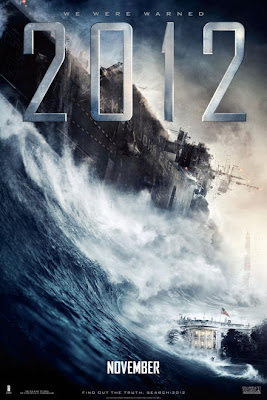 First off, lets take a look at the poster of the ocean, and the aircraft carrier John F. Kennedy, crashing down on the White House.

Of course, the first thing that sticks out is Emmerich's signature 'destroying the White House' attention-getter/shock-and-aw imagery that he used in "Independence Day". However, on closer inspection anyone who is familiar with DC would recognize that the ocean is coming from the wrong direction and that the Washington Monument is in the wrong place.

I also like the fighter plane that is defying gravity on the deck of the carrier. 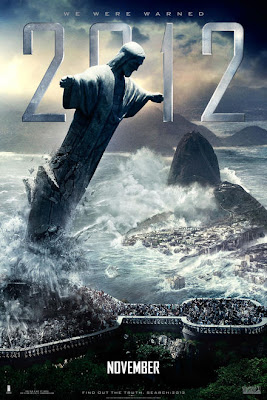 The second one shows the ocean knocking down the Christ the Redeemer statue in Rio de Janeiro, Brazil.

Again this image is supposed to invoke a emotional response, but religious affiliations aside, isn't the fact that Jesus is about to crush a bunch of people a little on the side of bad taste?

Oh, and check out the size of the statue, it's gigantic. I went and checked, the real Christ the Redeemer statue is 120ft tall, which is really big, but from the pictures I've seen, it's only about 1/3 of the size of what's seen here.

And I should also mention that the ocean is coming from the wrong direction again. 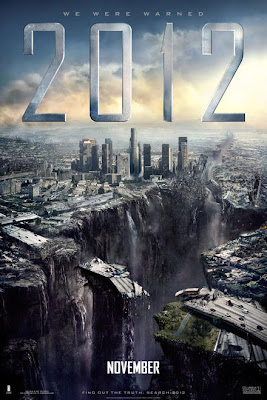 This brings us to our last poster, which shows a huge earthquake created chasm winding it's way through downtown Los Angeles.

Don't you find it odd that a quake that was strong enough to create a canyon wasn't strong enough to knock down any buildings? I mean, sure there's a big hole in the ground, but all the surrounding structures seem to be intact.

Being a native Californian, I want to point out that during an earthquake the ground doesn't open up like it did in "Beneath the Planet of the Apes" or a Hanna-Barbera cartoon. For something like this to occur, the quake would have to be like a 50.0, and I doubt any skyscrapers would survive that.

Most movie-goers already know that director Roland Emmerich isn't one to worry the details. I fondly remember the scene in "Godzilla" where reporter Audrey Timmonds (played by Maria Pitillo) screams at a fellow reporter on TV, "He said Gojeera, you idiot." A mistaken pronunciation of the Japanese spelling of Godzilla, which is Gojira.It's still pronounced "Godzilla" by the way and don't get me started with "The Day After Tomorrow", nothing in that movie made a bit of sense.