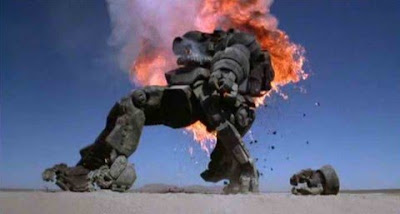 I think that just about everyone reading this remembers the classic toy/game "Rock 'Em Sock 'Em Robots". You know, the one with the red and blue robots in a boxing ring, where the winner has to land a punch to the grill of the other robot to cause it's head to pop off.

Well, apparently the folks over at DreamWorks believe that the idea of two robots boxing each other, just like in this game, would make one hell of a good idea for new movie.

The company has just hired Shawn Levy to direct "Real Steel," a story about a father and son team that control a 2000 pound robot boxer. Robert Zemeckis, Jack Rapke and Steve Starkey have also signed on to the project as producers.

The concept of "Real Steel" also reminds me of the 1990 film, "Robot Jox". In that one, if you remember, all the nations of the world have given up on conventional warfare, and use giant robots fighting each other in huge arenas to settle their differences.

I don't know if the robots in "Real Steel" will be gigantic or more human sized, but I think that the "bigger is better" cliche applies here. I don't know how many fans would turn out for a robot version of "Rocky"?
By Ken Hulsey - September 16, 2009