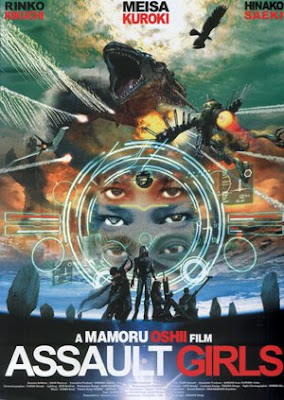 For quite some time now you have read on and on about how geeked up I am about Mamoru Oshii's upcoming sci fi action film "Assault Girls".

With the release date quickly approaching, December 19th in Japan, information about the film is now starting to be more forthcoming. Today we have the first look at the films poster and a more detailed synopsis:

The story takes place in an in-game virtual space called "Avalon (f)", a barren desert-like battlefield, resembling a devastated world after a nuclear war. "Avalon (f)" is a world full of gigantic monsters. It is a fictional world where an endless "hunt", known as "play", repeatedly takes place. The drama centers around a sniper who pilots a camouflage fighter plane; a sorcerer who can freely transform herself; a woman fighter equipped with an assault rifle on a horseback; and a large-framed man equipped with an anti-tank rifle. There is also the "Game Master" who watches the players from the air.

In a world where giant Sunakujira (Sand Whales) monsters crawl the earth, storming battleships fly high up in the sky, and assault rifle muzzle flashes go off everywhere, can anyone shoot down the mutant monster, Madara Sunakujira (Spotted Sand Whale)? If so, who?!

That puts a better perspective on things.

Speaking of awesome looking films, I stumbled upon the trailer for this upcoming film yesterday. The film is called "The Cup of Tears", and believe it or not, it is actually a sci fi/martial arts film produced by the Irish film company One Punch Films under the direction of Gary Shore.

Give this a look:

Here is the synopsis from "The Cup of Tears":

The narrative follows a scorned geisha who creates a magical cup made of tears that causes any man who drinks from it to fall under a stasis of permanent sleep. One night the cup is stolen, setting off a chain of events that threatens civil war amongst the clans. Taro, a once gifted samurai, and his companion Jin set out to find the cup and the one who can break the spell before inner turmoil.