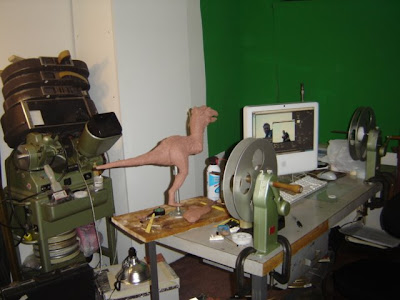 Everyone knows that the backbone of any fantasy or science fiction film is it's special effects. Now, George Lucas can go on and on about how any movie effect is boring without a good story to set it up, but as we know from his "Star Wars" prequel series, good effects can make up for a week story, or even fill in where there is no story at all.
When it comes to movie effects, and in particular monster movie effects, there are three ways to go. The very time consuming art of of stop-motion animation, the sometimes effective and some times not, art of putting a man in a monster suite, like the Japanese "Godzilla" and "Gamera" films use, or the quicker and cheaper computer generated type of effects that are permeating the movie industry.
Well I have good examples of two of those types of effects for you here today.

First, I want to show you a great video by film maker Larry Arpin on how he is doing the effects for his independent film "Galactic Raiders". For the film, Arpin is doing it the old-fashioned way, using stop-motion monsters.
As I said before, this process is very time-consuming. That is probably why "Galactic Raiders" has been in production for over a year and a half.
I do give Larry a lot of props for following in the footsteps of Ray Harryhausen in producing these effects. I honestly wish more people would go back to this.


Now we move to the complete opposite end of the effects spectrum with a clip from Jim Wynorski's "Dinocroc vs. Supergator". As you can probably guess, this film features modern computer generated effects.
Many people are fans of what technology has done to improve the quality of movie effects, and no one can argue that the medium has put the tools for creating impressive effects into the hands of film makers who can now make the kinds of films that were impossible to produce just a decade ago.

Which is better? Well that depends on who you talk to. I personally believe that each has their place in modern film making. Sometimes combinations of all the above methods work out best. The Japanese, for example, have used stop-motion, suite actors and CGI effects in their recent monster movies, with mixed results. Hollywood, on the other hand, likes to throw as much computer generated effects at you as they can.
In the end, I think that film makers will always be discovering new and inventive ways to produce film effects using whatever is available to them, and who can say what the future will hold. Whether you do it 'old-school' like Arpin, or with the power of the computer, like Wynorski, movie effects continue to spark the imagination and inspire future film makers to produce their own fascinating films.
See Also: The Monster Mash - 08/17/09 - A Look At Smaller Monster Movie Productions / Behind The Scenes Photos From Galactic Raiders / Galactic Raiders - Making Larry Arpin's Dream Come True