Evangelion 1.01 You Are (Not) Alone - English Dubbed - The First Eight Minutes - HD 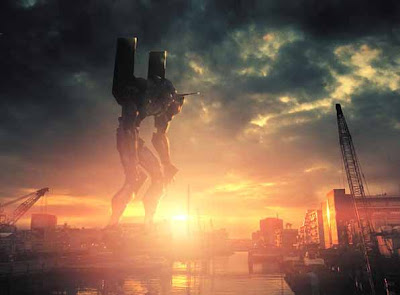 There is a popular adage that states, "If it isn't broken, don't fix it." Most people in entertainment industry generally live by these words, normally leaving their pet projects alone once they are completed. Of course, there are always exceptions. As we know, George Lucas believes that his films are 'never' finished and in the case of Japanese director Hideaki Anno, he believes that his popular animated series, "Neon Genesis Evangelion" should get a complete face-lift every decade or so.

In 2007 Anno set out to remake the first six episodes of "Evangelion" a re release them as four separate theatrical features. It was not the film makers intention to 'change' the series in any serious way, just to update the animation with modern techniques and add some computer graphics.

Some may consider such a time consuming venture 'fool-hardy', due to the fact that the original series was such a hit, and also because the series still covets hordes of 'die-hard' fans that savour every 'unaltered' frame.

From a financial standpoint, however, Anno's relaunch of "Evangelion" turned out to be a bonanza.

When the first installment, entitled "Evangelion: 1.0 You Are (Not) Alone" hit Japanese theaters in September of 2007, it quickly became the number box office draw. In it's initial weekend, the film grossed an amazing Y280 million ($2.4 million) though it was only showing on 84 screens.

This success took the Japanese entertainment industry totally by surprise.

Likewise, the subsequent release of "Evangelion: 2.0 You Can (Not) Advance" this past summer was also a huge hit, as should be the forthcoming "Evangelion: 3.0" and "Evangelion: Final".

It is rumored that the last installment will feature a brand-new ending, the only substantial change that Anno had planned for his "Rebuild of Evangelion" tetralogy.

American "Evangelion" fans will finally get to see "Evangelion 1.0" on November 17th when the anime distributor, Funimation Productions, will release the film on DVD.

As a promotion, Funimation has released the first eight minutes of "Evangelion: 1.0 You Are (Not) Alone" and I have that clip for you below:

Shinji Ikari is sent for by his estranged father, Gendo at the beginning of the film. As he wanders around the town, which has been shut down over an emergency announcement, he is caught in the crossfire between the U.N. army and the fourth Angel. Rescued by Lt. Colonel Misato Katsuragi, Shinji is brought to Tokyo-3 and NERV headquarters, where he is pressured by Gendo, NERV's Supreme Commander, into piloting the Evangelion Unit-01 against the Angel because the other Evangelion pilot, the mysterious Rei Ayanami, is too injured to do so. After the initial fight, Shinji is taken in by Misato as her new housemate and enrolled in middle school. The film portrays Shinji's attempts to "settle in" with his newfound life alongside Misato, Rei, and the other characters while continuing to defend Tokyo-3 and the world from the coming Angels.

At the film's climax, the sixth Angel tries to drill into NERV headquarters. To motivate the despondent Shinji, Misato takes him down to the deepest level of the base and shows him a giant white entity crucified to a giant cross-like restraint: the second Angel, Lilith. Misato explains that reaching this area is the goal of the Angels and that any contact between them and Lilith would bring about the end of all life on Earth.

With this information and the encouragement from his new friends in school, Shinji and Rei, piloting Unit-00, attempt to kill the Angel by sniping it using the Evangelions and an experimental positron rifle, which requires the entire electrical power output of Japan to function. Rei is nearly killed in the battle, though Shinji is able to save her by prying her out of her damaged Eva using Unit 01's Progressive Knife. Shinji and the normally cold Rei share an emotional moment and Rei eventually shares a warm smile with him.

The final scene opens on the surface of the Moon, with what appears to be blood splashed across a large swath of it. Nine coffin-like containers are arranged in a line on the surface, with five of them open. Kaworu Nagisa awakens and rises from the fifth container. In front of him is an unidentified white giant, surrounded by construction equipment and scaffolding, wearing a purple Seele mask. Kaworu engages in a brief, cryptic conversation with the Seele 01 monolith, saying that "the third one" has not changed at all and that he looks forward to meeting Shinji.

Email ThisBlogThis!Share to TwitterShare to FacebookShare to Pinterest
Labels: Anime, DVD, Evangelion, Evangelion: 1.0 You Are (Not) Alone, Giant Robot, Japan