Return to Yucca Flats: Desert Man-Beast - Director Thinks It's The Worst Film Ever Made? 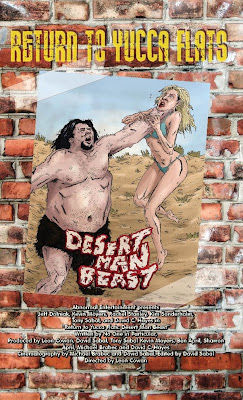 When a director normally talks about a movie that they are working on, they generally try and hype it up a bit by saying that it is one of the best films of a certain genre.

In fact recently Jennifer Lynch went as far as to say that her new film "Hisss" is, "....the greatest horror movie made in the history of cinema, better than Hitchcock, better than 'The Exorcist'”.

Now in the case of David Hayes, and his new movie, "Return to Yucca Flats: Desert Man-Beast", you get the exact opposite. Hayes isn't trying to hype up his movie by saying how great it is, oh no, he wants everyone to know just how bad it is.

Imagine my reaction when I read this quote from the film maker, "Frankly, and inadvertently, we have made the worst movie ever. I'm not joking. I'm serious. It is horrible. No company in their right mind would distribute this one! You won't believe just how bad this is."

At first I was puzzled by this. Then I realized that Hayes is a genius.

Just hear me out.

When you think about it, anyone can make a 'good' movie, but it takes a lot of talent to make a bad one. Honestly, it's not as easy as you think.

Also, to come right out and say it's bad, is an excellent move on the director's part.

Before I read Hayes comments, I honestly didn't care that much about, "Return to Yucca Flats: Desert Man-Beast", but now I have to see it. 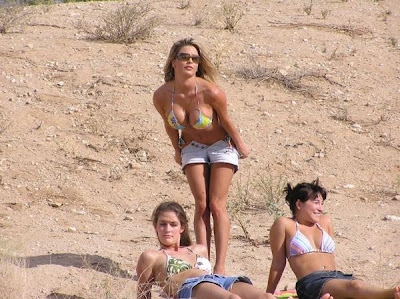 From the outset, it didn't look like Hayes had much to work with. The film, which is a follow-up to the 1961 cult movie classic, "The Beast of Yucca Flats", basically is just about some harry guy (Hayes himself) terrorizing a bunch of mega-hot girls in bikinis (see above).

To be honest, the original "Beast of Yucca Flats" is just B movie icon Tor Johnson wandering around in the desert, so adding bikini girls to the mix, could be considered more genius on Hayes part as well.

More people know about the films of Ed Wood, Roger Corman and Russ Meyer than they do about the ones made by Rob Marshall (His film "Chicago" won the Oscar for 'best picture' in 2003).

Yes, I really think that Hayes is on to something here. Besides, in this business, there is no such thing as 'bad' publicity, so by coming out and saying that he has made a less than "B" movie, he will certainly get more attention for his film than he would otherwise.

Look for "Return to Yucca Flats: Desert Man-Beast" to be for sale at Amazon.com in few months.