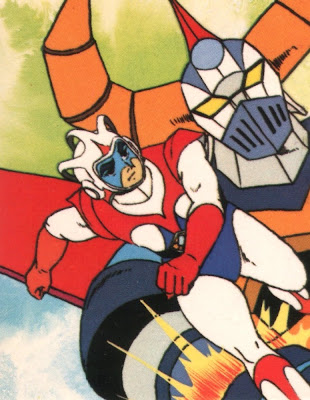 There have been many people in the entertainment biz that have questioned why film maker, Jules Urbach, would opt to make a live-action, 3D, film based on a Japanese giant robot cartoon from the 1970s that was rarely seen on American television?

Others are also wondering why Urbach would choose to release his film, "Gaiking", in the same year as "Godzilla 2012", "The Avengers", "Star Trek 2", "Batman 3", possibly "Cloverfield 2", "Iron Man 3", and the newly announced, "Monsterpocalypse"?

True, the "Transformers" movies have made bank, and similar films, such as "Robotech", "Voltron" and "Battletech" are also in development for release over the next few years, but making a film based on a property such as "Gaiking" looks, on the outset, like a major gamble.

I'm sure that there are a good amount of us generation x'ers out there that remember "Gaiking" from the popular Mattel toy line, "Shogun Warriors", which came out in the late 70s, but that's hardly enough of a fan base to warrant such an outing........or is it?

Recently the website, Heat Vision, caught up with Urbach and picked his brain for information about his film:

HV: "Transformers" is pretty huge. and there's a "Voltron" movie in the works. Is there room for something like "Gaiking" that isn't that well known here?

Urbach: "Voltron" really took off because of the great cartoon. "Gaiking" never had that and neither did "Shogun Warriors" as a whole. The only thing we had was "Four Spies" here in the U.S. And that was only shown on the East coast for a little bit. I can only imagine how this property would have been perceived if we had a normal cartoon.

In France or Italy, this is bigger than Spider-Man. Toei understands this will do very well in Europe, where the cartoon is well-known. They approached us because they wanted somebody outside Japan to take a crack at this.

Our goal was to figure out a way that would be appealing to an American audience. And while there's a lot of people who played with the toys, we are not counting on any of that. For most people, this will be completely new.

And I think we did a good job introducing it, even from that little teaser. It's just been exciting to be introducing it to a lot of people and seeing their reaction.

HV: Are you worried about the title being a little inaccessible? Why not go with "Shogun Warriors"?

Urbach: We wanted to introduce one robot and thought it should be the focus of the film. It's like you want to introduce Superman before you introduce the Justice League, right?

The title is something that we're still looking at. It's in the mix. We are very aware of the possible limitations. I can't speak for Toei, so I can't speak how it will be used in the marketing of that film. We just want to use it wisely.

HV: There was a time when there were a lot of giant robot cartoons. And now with special effects technology being where it is, we're poised for a movement in movies. What do you think is the appeal of giant robots?

Urbach: Gaiking and those kinds of robots, you're talking about giant robots that are piloted by humans. You're not talking about Transformers, where they are their own characters. These robots are the extension of the pilots; they are really like giant suits of armor. So it's really the people inside them that are the characters. That is a huge differentiator. Gaiking is one pilot. It's really the pilot expressing himself through this giant mecha.

Read more of this interview - HERE

Here is that mega-cool teaser trailer that is mentioned in the interview:

Though the film maker doesn't touch on it in the interview, there is already interest in adding more of the robots from the "Shogun Warriors" line in a planned sequel, tentatively titled.....you guessed it...."Shogun Warriors".

Just which of these classic Japanese giant robots will make it into that film is still up in the air, but reportedly Urbach has already secured the rights to many of them and in his own words, "(Shogun Warriors)...will feature more of the robots, than the Marvel Comics series did."

Now, I know exactly what you are thinking. The "Shogun Warriors" line of toys featured a few very prominent names from Japanese pop-culture, including, The Great Mazinger, Godzilla, and, unofficially, Rodan.

Was Urbach able to secure the rights to use any of these characters in his film? Will we see Mazinger (called Mazinga in the toy line) in the movie? Could the film maker have been able to cough up enough dough to get Toho to let him use two of their prize properties, namely Godzilla and Rodan?

Urbach isn't saying, yet, which robots are going to be in his movie, except Gaiking....and that's kinda a given. Though, he does plan to reveal all at this years Comic Con, which I will be attending.

Of course, since Legendary Pictures is already making a "Godzilla" movie here in The States, so any chance of seeing the monster go toe-to-toe with Japan's greatest giant robots is all but an absolute 'no chance in hell'.

Though, that may make for the greatest movie ever!

I don't see that happening, and without Godzilla, there certainly won't be a Rodan in the mix either.

Mazinger, however, could be in the film, and that alone would be amazing.

Wonder why Urbach didn't go with Mazinger anyway? I mean, the Japanese animated show was released here in America under the name, "Tranzor Z".

Oh, well. Here is some history on "Gaiking" and the "Shogun Warriors" from Wikipeadia:

Demon Dragon of the Heavens Gaiking (大空魔竜ガイキング, Daikū Maryū Gaikingu) was a Super Robot mecha anime series produced by Toei Animation, credited as an original idea by Akio Sugino. However, in reality the original idea was of Go Nagai. Toei deliberately took Nagai out of the credits in order to avoid the payment of royalties. Because of that, Nagai sued Toei and stopped further collaborations with Toei for a long time. The legal battle lasted more than 10 years. Nagai himself confirmed that he was the creator of Gaiking in the Comicon 2007 in Naples, Italy.

It ran from April 1976 through January 1977 and consisted of 44 26-minute episodes. Gaiking was notable for being one of the few super robot series to take place in real places outside of Japan, and for being the first Super Robot series to have a mobile carrier for the chief robots. In the USA, Gaiking was part of Mattel's popular Shogun Warriors import toy line of the late 1970's and Jim Terry's Force Five anthology series. In 2005, a sequel titled "Gaiking Legend of Daiku-Maryu" was produced. On March 28, 2010, a Live-Action Movie based on the series, simply entitled, Gaiking, was announced at the 2010 Tokyo Animation Fair. In international production will be helmed by American filmmakers, Jules Urbach and Matthew Gratzner. Gaiking is being prepped for a 2012 world-wide release.

Shogun Warriors were a line of toys, licensed by Mattel during the late 1970s that consisted of a series of imported Japanese robots all based on then-popular giant robot anime shows. They were originally manufactured in three sizes, the 24-inch (610 mm) plastic versions, the 3.5-inch (89 mm) diecast metal versions and the slightly taller but much more detailed and articulated 5" diecast versions. There were also several vehicles offered and a set that could be put together to form Combattra (Combattler V).

The most attractive features on these toys were the spring loaded launcher weapons such as missiles, star shuriken, and battleaxes. Some robots were able to launch their fists. The later diecast versions of these toys were also attractive for the ability to transform into different shapes. Raydeen, for instance, was changeable into a birdlike spaceship. These "convertible" editions were the precursors to the "Transformers" line of toy robots but unlike the later toyline it was not unusual for minor dissasembly to be required to achieve the secondary form. There was even a robot named Megatron in issue #18 of the comic, then the name was used multipe times for the leader of the evil Decepticons from Transformers. Also, the second form was not always an apparently useful one, a "giant skull" for instance.

Like certain other toylines of the 70s, the Shogun Warriors came under pressure due to safety concerns regarding their spring loaded weapons features. Children would launch the weapons and hit other children or pets in the eye, or else they would swallow the plastic missiles. Toy manufacturers were facing new regulations due to reported child injuries as a result of playing with these toys. Consequently, many toy companies were forced to remodel existing toylines with child safe variations (such as spring loaded "action" missiles that would remain attached to the toy). For this reason, as well as decreasing sales, the Shogun Warriors toyline disappeared by 1980.

Several of the anime from this toyline were seen in the 80s as part of Jim Terry's Force Five series.

Shogun Warriors was licensed in 1979–1980 for a 20-issue series by Marvel Comics, which was written by Doug Moench and featured art by Herb Trimpe. In the comic, the Shogun Warriors were created by a mysterious group called the Followers of the Light. Human operators were chosen from all around the world to operate the massive robots in order to battle evil.

The series is firmly rooted in the Marvel Universe, as evidenced by their interactions with Doctor Demonicus in issues #12-14 and the Fantastic Four in the last two issues of the series. Issue #15 was a fill-in issue written by Steven Grant with art by Mike Vosburg. The series took a dramatic turn with issue #16, as the Shogun Warriors' mentors were destroyed by the Primal One and his followers. This alien force decided that Earth's technology had outpaced its morality, and so it was their duty to destroy the Shogun Warriors as well as other powerful humans, including Reed Richards and Tony Stark.

Though he never appeared in the comic series, Red Ronin (a robot created for Marvel's Godzilla comic) was mentioned occasionally and was frequently talked about in the letters pages.

Get Ready With Your Finger Missiles And Robot Punch! The Shogun Warriors Are Coming To The Big Screen!
By Ken Hulsey - May 17, 2010