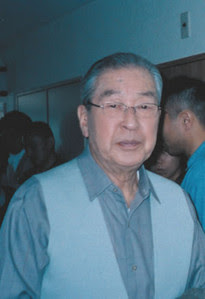 The man who played the intense prime minister who stopped the United States and the Soviet Union from going to war after Godzilla attacked a Soviet nuclear submarine has passed away.

Keiju Kobayashi, whose earnest performances endeared him to viewers throughout his nearly seven-decade long career, died of heart failure at a Tokyo hospital Thursday, his agency said Saturday. He was 86.

Kobayashi played Prime Minister Mitamura in Return of Godzilla (1984) (a.k.a. Godzilla 1985) in a very memorable performance. In that movie, the United States and the Soviet Union were about to go to war after a Soviet submarine was sunk by Godzilla. As the prime minister, he disclosed the real culprit for the sinking to both governments, thus averting war. He also resisted the U.S. and U.S.S.R. ambassadors' demands to use nuclear weapons against Godzilla.

His career spanned seven decades with his most recent role in Koisuru kanojo, nishi e. (2008).

Kobayashi appeared in roles ranging from prime ministers to police detectives in over 260 movies and television dramas.

He was also the recipient of medals of honor from the Japanese government for his achievements and cultural contributions.
By Armand Vaquer - September 20, 2010