KINGDOM OF THE SPIDERS Being Remade In 3D 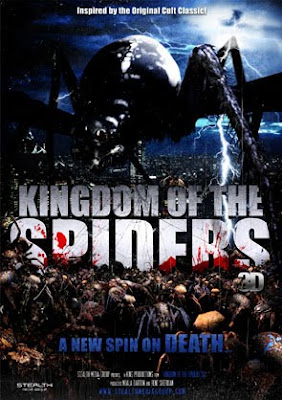 Remakes and 3D films are all the rage these days, so is it any surprise that Stealth Media Group has hired Nuala Barton and Rene Sheridan to produce a modern, 3D, version of the 1977 cult film "Kingdom of the Spiders", which originally starred "Star Trek" alumni William Shatner?

If you recall, the original "Kingdom of the Spiders" was about a small Arizona town (Sedona) that was overrun by thousands of hungry tarantulas.

This time around, however, and if the promo poster to the right is any indication, it looks like a major city is set to face an epic infestation of arachnids this time, and not by only tarantulas, but all kinds of creepy crawlers.

The two producers made this rather benign comment about their upcoming film, “We are delighted to be working with Stealth Media’s Jason Piette, Sean O’Kelly and Michael Cowan to bring this cult classic back to larger than life, in 3D.”

Not much to go on there.

Look for more information on "Kingdom of the Spiders 3D" to crawl out from under the furniture soon.