Lost KING KONG Print May Not Be As Old, Or Rare, As First Believed 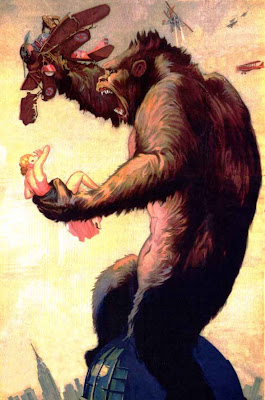 Earlier this week I posted an article about a rare copy of the classic monster movie "King Kong" that was discovered in the wall of a London movie house. The article has been linked on several different websites and referenced on several others. It seems that many a movie buff was more than just a little excited about the possibility of a rare print of "Kong", with possibly 'missing' footage in tact, being found for everyone to enjoy.

Alas, I hate to be the one to dash every ones hopes, but the copy of the film that sat in a wall for decades waiting to be unearthed, may not be what was advertised.

The print that was discovered is indeed old, and somewhat rare, but further examination has revealed that the film stock is composed of celluloid and not nitrate means that it probably dates back to the 1950s, not the 30s as first reported.

If this is indeed true, any hopes of this copy of "King Kong" containing any rare footage or deleted scenes is slim to none.

It seems that during all the excitement caused by the discovery of an old copy of such a classic film, no one really took the time to examine it to find out exactly what they had in hand.

There is an interesting rumor emerging that suggests one of the Grosvenor Cinema's (the theater where the film was discovered) past employees hid the film so that they could come back and steal it later.

No one knows if that is the case or not.

For now, fans can find some joy that a piece of cinema history has been found, even if it doesn't contain certain items that have been lost for decades.