Joe Harris To Sink His Teeth Into VAMPIRELLA & THE SCARLET LEGION 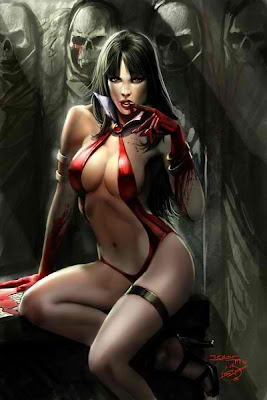 Keeping in mind that #1 main covers sold out from Dynamite, and Vampirella #2 close to a near sell out, there is no question that Dynamite's Vampirella title is a bonafide hit! Dynamite also recently announced that Vampirella Archives, Vol. 1 was #1 on Hardcover Graphic Books New York Times Bestseller List for the week of January 23rd! Dynamite plans on continuing Vampirella's amazing success with Vampirella & the Scarlet Legion!

In May's Vampirella & the Scarlet Legion #1, The Crimson Chronicles, that foul bible of blood, foretells the coming of Chaos, the Destroyer and his servants on earth. Since her earliest days, Vampirella has stood between that vicious cult and their Mad God's plans. But when an ancient prophecy of doom is uncovered and a new push to resurrect the foulest demons from the pit is revealed, it's clear Vampirella won't be able to take them on alone. Enter THE SCARLET LEGION, assembled to keep the dark things at bay and protect this world from the evils which lie beyond. The only question is, will they see Vampirella as friend... or foe?

"I'm stoked to be working on a Vampirella story, one of the baddest, sexiest and most iconic characters and properties in horror comics," says writer Joe Harris. "We're looking to do something big and sprawling with a bit of a globe-spanning sweep to it. A big screen adventure interwoven with some some frightening and truly horrific moments that, I hope, will help keep the dark scary. Vampirella & The Scarlet Legion expands our vampire heroine's inner circle a bit, but not always with friends. Sometimes rivals, or even enemies, make for more interesting dynamics. We're doing horror, after all. You want to keep things tense, and less than rosy. I'm a big fan of what Dynamite has been able to do in this market and I'm both proud and humbled to be on board. They've taken some great properties and really carved out a space for themselves. Nick Barrucci is a true patron of this industry and it's no wonder Dynamite have gotten a lot of well-deserved attention lately."

"I've always followed Joe Harris' writing history, admiring his work inside and outside of the comics market," says Dynamite President and Publisher Nick Barrucci. "After making his return to comics at Oni, we've kept in touch for the last few years trying to find the right project. Vampirella is very important to Dynamite and we would not entrust a series, even a mini-series, to anyone that could not execute. Having seen the overview and Joe's script to date, we definitely made the right call!"

"There are some great things happening in the Vampirella ongoing and now that we've brought Joe [Harris] in, we can begin to add a little flesh to the skeleton," says Dynamite Editor Joe Rybandt. "Readers of the ongoing know that the mystery is right there upfront in terms of who or what Vampirella is and with Vampirella & the Scarlet Legion, we take a step back to time shortly before our main series and explore the roots of the world Vampirella is finding herself in. We'll meet some old friends and a slew of new enemies along the way, Guaranteed."