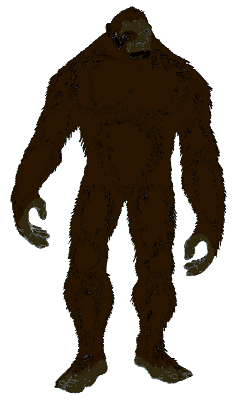 Oh yes there are all kinds of alleged creatures wandering around out in the Australian wilderness. There are dinosaurs, the once believed extinct Thylacine, giant spiders, reptiles of shapes and sizes and of course Bigfoot.

Not as well known around the globe as the Yeti of Tibet, the Sasquatch of Canada or the Bigfoot from here in the good old US of A the Yowie has been a staple in folklore from the land down under for centuries.

As a matter of fact the Yowie doesn't get seen too often, due mostly to the fact that Australia has hundreds of miles of wilderness where man seldom ventures to hind in, so likewise he normally doesn't get much press.

Anyway, a motorist, who wanted to only be identified as Dean, was busy Tuesday morning at about 2:30 am on his usual route (Pacific Hwy, north of Grafton) as a truck driver when he spotted something strange.

“I reached the top of the hill and I was coming around the sweeping corner to the right when I noticed something a lot larger than a kangaroo in the middle of the road – my headlights weren't on it yet but it was a bright night and I saw what looked like a large person stooped over, with a big overcoat on,” Dean explains.

“At the time I thought ‘you silly old thing, what are you doing in the middle of the road at this time of the morning', but next thing I knew my headlights started to light it up and it took one giant step off the road, it went from standing up like a person to going down on all fours and then it disappeared into the scrub in about three bounds.”

The eyewitness described the creature as being well over 6-feet tall and covered with jet blck hair or fur.

“It had an almost sort of a square, shaggy block head sitting straight on its shoulders – I'm a pretty big guy but it made me absolutely awe-struck how huge its body was – it had its arm up against a tree and it had about a foot of hair hanging from under its biceps.”

The sighting has left the eyewitness rather rattled and wanting desperately to come to terms with what he saw.

“Anybody who knows me knows I'm the ultimate realist but this was an awe-inspiring moment, it's definitely made me a believer,” Dean adds.

Since his encounter Dean has been in contact with local Yowie investigators who believe his story is legit.

Is what Dean saw a monster .... some other mammal possibly some huge koala? Was it possibly another of Australia's mythical creatures, the drop bear? Was it one of the members of Men at Work out looking for food ..... or a Fosters?