The Space Shuttle Program: In The Beginning

Space, the final frontier. These are the voyages of the flying brick Enterprise... 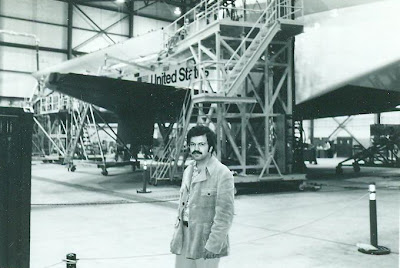 Above, Armand with the shuttle prototype "Enterprise."

The winding down of the U.S. Space Shuttle program caused me to look back at the beginnings of the program back in the 1970s.

I've always been a fan of the U.S. Space Program, beginning with Project Mercury. It has been my contention that the space program is the only worthwhile U.S. government program.

In the beginning, the shuttle program started out at the NASA's Dryden test center at Edwards Air Force Base out in the Mojave Desert.

In 1977, a friend of mine, Mitch Geriminsky was in the U.S. Air Force and was stationed at Edwards. Talk about being at the right place and at the right time! One weekend, I paid a visit and Mitch took me over to the space shuttle facilities at Edwards.

Luckily for me, I had my camera with me when we visited the shuttle facilities. The photographs are in black & white as I had a black & white darkroom at home where I developed and printed photographs.

First off, we viewed the modified Boeing 747 used to piggy-back the shuttle prototype, Enterprise. 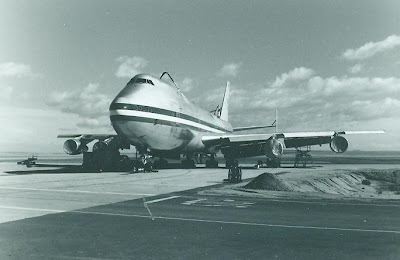 Above, the modified Boeing 747. Photo by Armand Vaquer.

Enterprise was so-named as fans of Star Trek petitioned NASA to name it after the television show's starship. Actually, they should have waited a bit so that a space-worthy shuttle would carry the Enterprise name. The prototype was never intended for space flights and it was just used for gliding tests. The 747 would carry it aloft and release it and it would glide for landings on Rogers Dry Lake. 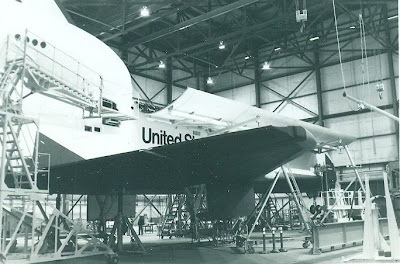 The first space-worthy shuttle, Columbia, was under construction. Its maiden flight was in 1981.

After viewing the 747, we went over to the main shuttle hangar and went inside. There, in the hangar, was Enterprise. 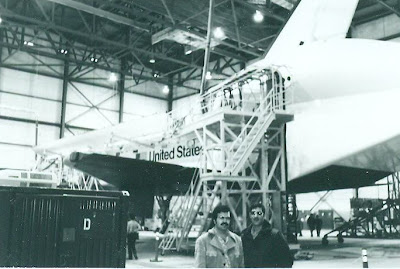 Above, Mitch and Armand with "Enterprise."

It was fascinating to see up close the Enterprise and the 747. I was able to attend two shuttle landings when the shuttles became operational: Columbia in July 1982 and Endeavour in May 1992.
By Armand Vaquer at May 18, 2011