ODD ENCOUNTERS Is Open And Ready For Unearthly Business 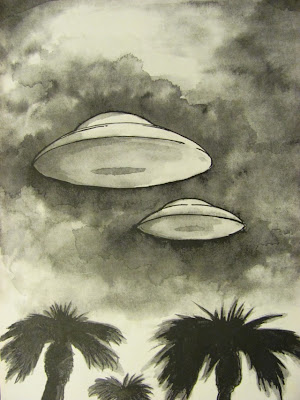 Back in July I posted some press information about a new paranormal website called "Odd Encounters" where people can post their own stories about monsters, UFOs and ghostly visits. Earlier this week the site's founder Ray Fox shot me an email stating that he loved Monster Island News and he was thrilled that I had posted the info on his site.

Ray also went on to note that Odd Encounters was now up and running and ready for people to submit their stories.

Here is an updated press release:

OddEncounters.com is seeking true tales of the paranormal--real ghost stories, ufo reports and reports of brushes with strange creatures. The first edition of bizarre stories has been published and is now live on the site. Now we want to hear your story!

Along with the stories, photos and videos of the paranormal, an Odd Encounters Forum has been established to allow visitors to discuss the features posted on the site, as well as talk about their own odd encounters.

Visit the site at http://www.OddEncounters.com and delve into the world of the supernatural. If you've had a real paranormal experience of your own, submit your story to Odd Encounters today.

The truth is out there. Bring it into the light.

On a side note Ray's brother Mike runs a Halloween prop company called "Night Frights" that looks pretty cool. If you need anything for your haunted house go HERE
By Ken Hulsey at October 22, 2011