The Monstrous Movie Photo Of The Day: Unleashing The Newest, Biggest Double Shock The Screen Ever Got! 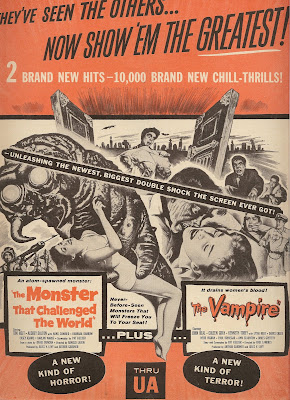 Today I continue on deeper into my personal collection of movie and TV related images. Like my last promotional item from "The Land Unknown" this full page advert was not something created for the eyes of the general public but instead to entice theater owners to screen the film, or in this case films, at their respective movie house.

I really love this dual advertisement for the films "The Monster That Challenged The World" and "The Vampire". The graphics are really sharp, though I could do without the banner that spans across the image. Like I stated before in a previous article, every single promotional image for "The Monster That Challenged The Word" looks like human-slug intercourse.

Am I wrong? Tell me that isn't what that looks like! Please! I may have a dirty mind but even Mother Theresa would say that looks a lot like the "horizontal mambo".

Anyway ... as film buffs will recall both films ran as a double feature in most cinemas though "The Vampire" (actually known as "El Vampiro in it's native Mexico) never enjoyed the cult status achieved by "Slugs Gone Wild!"

The Monster That Challenged the World (1957) is a science-fiction monster movie, about an army of giant mollusks that emerge from the Salton Sea, California. Directed by Arnold Laven, the film starred Tim Holt and Audrey Dalton.

It was produced by Gramercy Pictures (not related to the former PolyGram division) and released by United Artists.

An earthquake has led to the hatching of eggs belonging to a prehistoric mollusk. The hatchlings emerge from the Salton Sea, escape into an underground aquifer, and proceed to terrorize the citizens of California's Imperial Valley. The navy is called in to battle these monsters. Navy Lieutenant Commander John Twillinger (Holt), teams up with several scientists to battle the threat.

El vampiro (English: The Vampire) is a 1957 Mexican horror film, directed by Fernando Méndez. The film is about Marta, a young woman, who travels to her childhood village, only to find that one of her aunts is dead and another is under the influence of Mr. Duval, who later turns out to be a vampire whose name is the Count Karol de Lavud. It is possibly the first movie to actually show a vampire with elongated canines. F.W. Murnau's Nosferatu (Max Schrek) had elongated incisors; Tod Browning's Dracula (Bela Lugosi) did not show his teeth at all.