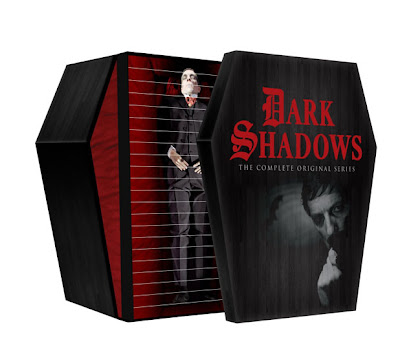 Back during my junior high (called "middle school" these days) and high school years, there was a Gothic soap opera (or "spook opera") that played on ABC-TV at 4:00 PM.

The show was Dark Shadows and it starred Joan Bennett as Elizabeth Collins Stoddard, the matriarch of the Collins Family of Collinsport, Maine and Jonathan Frid, as 175-year-old vampire Barnabas Collins.

It was a real treat to unwind after school to a show that featured vampires, witches, warlocks, a Frankenstein-type monster, ghosts, werewolves and all kinds of creatures of the occult.

The show ended in April 1971, but it never died. It was syndicated over the years and VHS and DVD sets were issued of the series. In 1991, it was revived as a prime-time show with a new cast. There have also been audio plays based on the series produced. Currently, it is now in production as a feature film starring Johnny Depp as Barnabas Collins. This isn't the first feature film based on the series. House of Dark Shadows was released by MGM in 1970 and Night of Dark Shadows a year later.