Vote For The Greatest Movie Monster Of All Time! 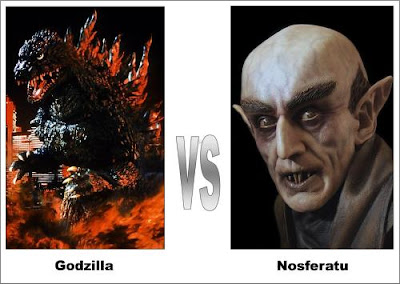 The San Jose Mercury news is asking it's readers to vote on just who is the greatest movie monster of all time!


Sure, King Kong is the top banana on his side of the jungle. But how would he fare against Jaws? And would our favorite great white stand a chance against that slimy creature from the "Alien" movies?

Now's the time to find out.

In honor of the most delightfully ghoulish month of the year, we are pitting our favorite monsters of all time against each other in a 32-monster bracket contest. Think of it as March Madness, only October style.

Best of all, you decide the winner -- the greatest monster of all time.

Here's how it will work. In a series of single-elimination battles between the monsters, voters will decide online which will advance.

There are some really intriguing first-round matchups. Freddy from "Nightmare on Elm Street" vs. Jigsaw from "Saw." Darth Vader ("Star Wars") battling Lord Voldemort ("Harry Potter"). And can Dracula hope to get past the Stay Puft Marshmallow Man ("Ghostbusters")?

That's entirely up to you. So vote now for your favorites on the right, or click here to start voting.

The first round ends Oct. 4. The winner will be announced before Halloween.


Of course we here at Monster Island News tackled this issue back in 2010. Check out our list of the Top 100 Movie Monsters Of All Time!
By Ken Hulsey at September 27, 2012