I've taken her to where she wished to go... To meet the man she came here to meet. 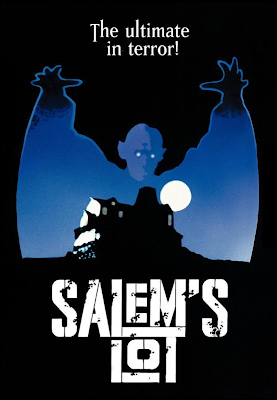 'Salem's Lot' (1979) was the first television mini-series (and the second film) to be based on the writings of author Stephen King. King was inspired to write the book when he had his English class read 'Dracula', and became curious about what would happen if vampires came to America, specifically in a small town.

The original novel established many motifs that Stephen King would use in his subsequent novels. It takes place in a small town in Maine, and many later stories took place in the small towns of Derry or Castle Rock. It features a much larger cast of characters than Carrie did, and most of his later books had a large cast. The main character, Ben Mears, is a professional writer, and another major character, Jason Burke, is a schoolteacher. Many of his subsequent characters were either or both. King himself also held both jobs.

The biggest issue that divides fans of the novel and film is the fact that Barlow is depicted as a hissing Nosferatu-like monster in the film, rather than the speaking Dracula-like character of the novel. In an interview with Richard Kobritz he said the decision to go with the terrifying monster figure came out of concerns that a speaking, romanticized villain just wouldn't be frightening enough. - IMDB