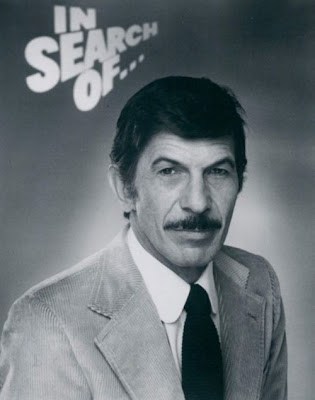 'Lost civilizations, extraterrestrials, myths and monsters, missing persons, magic and witchcraft, unexplained phenomena. "In Search Of..." cameras are traveling the world, seeking out these great mysteries. This program was the result of the work of scientists, researchers and a group of highly-skilled technicians.' - Leonard Nimoy

In Search of... is a documentary television series that was broadcast weekly from 1976 to 1982 devoted to mysteries and phenomena. It was created after three successful one-hour TV documentaries, In Search of Ancient Astronauts in 1973 (based on the book Chariots of the Gods? by Erich von Däniken), and In Search of Ancient Mysteries and The Outer Space Connection (both of which were written into popular paperbacks by series-creator Alan Landsburg) in 1975. All three feature narration by Rod Serling, who was the initial choice to host the series. After the death of Serling, Leonard Nimoy was chosen to be the host of the spin-off series.

The series conducted investigations into the controversial and paranormal (e.g., UFOs, Bigfoot, and the Loch Ness Monster). Additionally, it featured episodes about mysterious historical events and personalities such as Anna Anderson/Grand Duchess Anastasia, the Lincoln Assassination, the Jack the Ripper murders, infamous cults (e.g. Jim Jones), and missing persons, cities, and ships (e.g., Amelia Earhart, Jimmy Hoffa, D. B. Cooper, the Mary Celeste, the Titanic, the lost Roanoke Colony). Because the show often presented offbeat subjects and controversial theories, each episode's opening credits include a verbal disclaimer about the potentially conjecturable nature of the evidence and theories to be presented. - IMDB 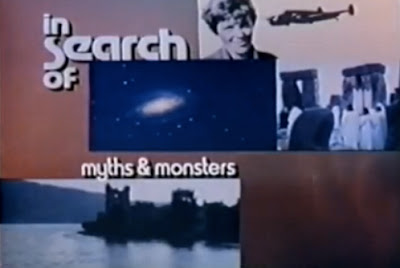 Leonard Nimoy, hosts and narrates this documentary series that takes you to the world of Unsolved Mysteries and those strange and unusual things in the world that defy explanation and often understanding. The world is filled with unexplained mysteries, paranormal phenomena, strange creatures, and other things that go bump in the night. The topics are entertaining and engrossing: Lost civilizations, extraterrestrials, myths and monsters, missing persons, magic and witchcraft, unexplained phenomena. Its style of interspersing 'talking heads' with sensationalistic video segments may have been the forerunner of 'info-tainment.' "In Search Of..." cameras travel the world, seeking out these great mysteries. This program was the result of the work of scientists, researchers and a group of highly-skilled technicians which resulted in a series of programs that are varied and are worth viewing.