We are already dead. We are Robot Jox! 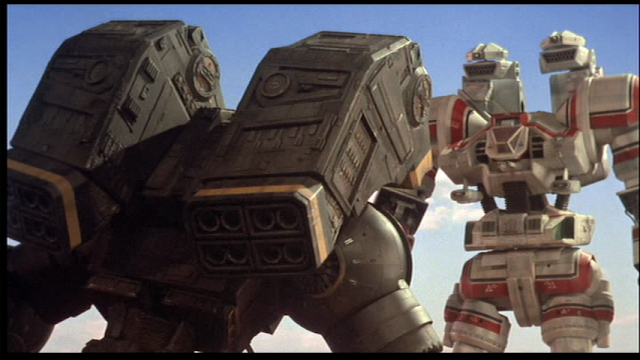 On the outside 'Robot Jox' sounded like it would be one super cool movie. Giant robots locked in combat in the fashion of the popular 'Battletech' board game played out in full cinematic glory.

This is going to be great!

Uh-Oh SpaghettiOs! What is this? A film so boring that you wished you were back at home watching 'Tranzor Z.' How can a movie with giant robots fighting each other be such a snoozer? How can you screw that up? It's 'Rocky' with robots for crying out loud!

The makers of 'Real Steel' ... I'm looking out of the corner of my eye at you.

Somehow film makers Stuart Gordon and the Band brothers (Charles and Albert) figured out how and not learning from their mistakes, went on to produce a series of giant robot films for the home video market. Those films ended up being so unmemorable that they aren't even listed on IMDB. 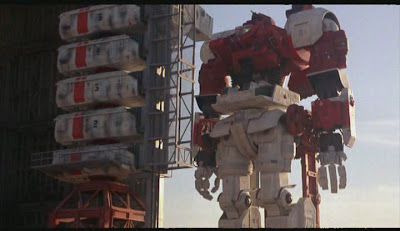 50 years after a nuclear war, the two superpowers handle territorial disputes in a different way. Each fields a giant robot to fight one-on-one battles in official matches, each piloted by a man inside, known as robot jockeys or jox. The contest for possession of Alaska will be fought by two of the best. The conscientious Achilles fights for the Americans. Opposing him is a Russian, Alexander, a ruthless and bloodthirsty adversary who has killed his previous nine American opponents. With a traitor feeding the Russians secret weapons information and new, genetically-engineered jox looking to take his place, Achilles faces obstacles at every turn in the hardest battle of his life. - IMDB

This One Is 100% Certified Cinematic Turkey!

Achilles: You're making my beer curdle.
Alexander: And you make my drink taste like blood.