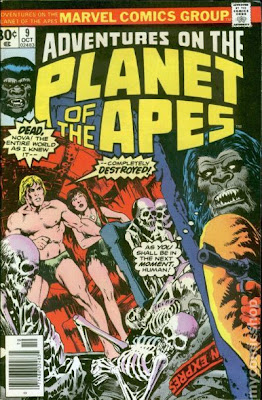 In the early 1970s Marvel Comics produced a great series of horror and movie inspired comic books after the Comics Code (which had put a strangle hold on comic book violence and graphic images) had become more liberal. A perfect example of how the industry had once again returned to it's macabre roots was well illustrated by Alfredo Alcala and Nick Caputo with their stunning cover to 'Adventures on the Planet of the Apes (1975) #9'. Though the scene depicted neither appeared in the comic or in the movie it was inspired by (Beneath the Planet of the Apes) the image of both Brent and Nova standing amongst a sea of skeletons while a gorilla soldier prepares to shoot them stood out as one of the best of the bunch.

The truly dark vision for the sequel to 'Planet of the Apes' didn't stop at the cover. The story and art work contained within by Doug Moench and Alfredo Alcala paints a truly macabre scene that makes you wish that the duo had in some way been involved in the production of the movie. Rarely did the comic book adaptation ever best the original feature but in this case it really, really did.

Attempting to flee the ape city, Brent and Nova are captured by gorillas. Ursus orders they be used for target practice, but Zira helps them escape. They hide in a cave which Brent soon discovers is the ruins of the Queensboro Plaza station of the New York City Subway, making him realize that he has travelled through time to Earth's post-apocalyptic future. After following a humming sound deeper into the underground tunnels, Brent begins to hear voices telling him to kill Nova. Entering the remains of St. Patrick's Cathedral, he finds a population of telepathic humans who worship an ancient nuclear bomb.

Brent and Nova are captured and telepathically interrogated, and Brent reveals the apes are marching on the Forbidden Zone. The telepaths attempt to repel the apes by projecting illusions of fire and other horrors, as they had done to Taylor and Nova. Dr. Zaius sees through the illusions, however, and leads the ape army to the ruined city. With the apes closing in, the telepaths plan to detonate their "Divine Bomb" as a last resort. They hold a religious ceremony, at the height of which they remove their masks to reveal that they have been grotesquely mutated by centuries of exposure to nuclear fallout.

Search for more Planet of the Apes comic books at My Comic Shop.com.
By Ken Hulsey at December 22, 2012