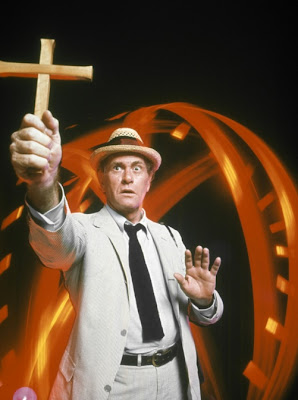 Darren McGavin explains: "My representatives called to say that ABC had purchased the right to a book called The Kolchak Papers. They were into a kind of first draft of a script by Richard Matheson, and they called the agency to ask them if I’d be interested in doing it. My representative read it and called me."

Listen," the agency representative said, "there’s this crazy story about a reporter and some kind of monster in Las Vegas. You don’t want to do this."

Showing the script to his wife, Kathie Browne, she agreed with his assessment. "You’re right. It’s terrific," she said.

With those two behind the project, the face, voice, mannerisms and clothing of Carl Kolchak took a major leap from the printed page to the small screen.

"Well, when you’re working that fast in television, McGavin said, "you have to draw on yourself. You use who you are to a greater extent than you would in a play or a film."

Kathie Browne McGavin, the one person who should know, has a stronger and far more direct response.

"He’s very, very close to Kolchak," she says. The people who really love The Night Stalker love Kolchak because he never gives up. He’s fighting, always fighting. You can take the monsters and take them to be anything you want – the government, big business, corrupt officials. Their hero comes at the end, beaten up but ready to go on fighting another day. I think Darren has a lot of that in his own personality." (Quotes taken from "The Night Stalker Companion," by Mark Dawidziak.)