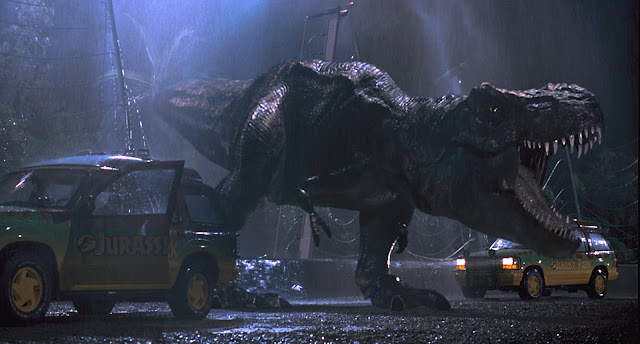 Universal Pictures will release Steven Spielberg's groundbreaking classic Jurassic Park in 3D on April 5, 2013. With his remastering of the epic into a state-of-the-art 3D format, Spielberg introduces the three-time Academy Award®-winning blockbuster to a new generation of moviegoers and allows longtime fans to experience the world he envisioned in a way that was unimaginable during the film's original release.

On Isla Nublar, a new park has just been built with genetic engineered dinosaurs. However, tragedy strikes when one of the workers is killed by a velociraptor. The founder of the park John Hammond (Richard Attenborough) requests Paleontologist Dr Alan Grant (Sam Neil) and his girlfriend Dr Ellie Sattler (Laura Dern) to come to the park and ensure that it is safe. Also joining them are Hammond's lawyer Donald Gennaro (Martin Ferrero) and chaos theorist Dr Ian Malcolm (Jeff Goldblum). When they reach the island, they are amazed to discover that Hammond has created living dinosaurs. However, at the same time they all have their doubts. Later, Hammonds grandchildren Lex and Tim (Ariana Richards and Joseph Mazzello) join the group in a tour of the park. Sattler soon leaves the tour to take care of an ill triceratops. However, soon the power in the park is shut down by Dennis Nedry (Wayne Knight) who wishes to steal embryos from the park and give them to his boss. In the process, many dinosaurs escape their paddocks, including the deadly tyrannosaurus rex, who attacks the children and Malcolm and eats Gennaro. Grant and the children are then lost in the park. Meanwhile Hammond, Sattler and the rest of the management team learn that Nedry (who in the mean time has left the park and been killed) has messed up the system. They attempt to get power back in the park in order to escape the island. When shutting down the system then turning it back on, the group realise that they have accidentally released velociraptors who are now on the hunt for the visitors. - IMDB
By Ken Hulsey at March 08, 2013