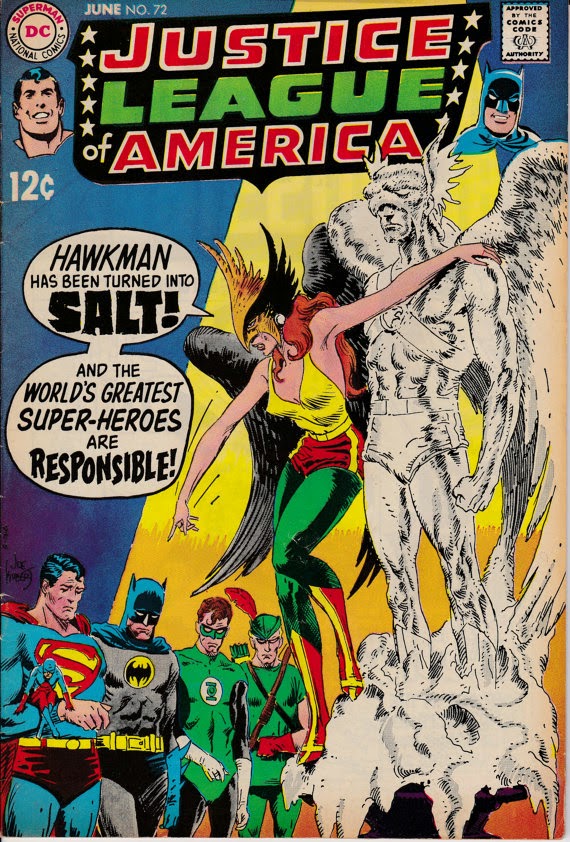 This comic book is in used condition. Comic is complete with cover and all pages attached. This comic has some flaws that warrant a VG/F grade.

The Justice League have just finished a prototype statue commemorating their departed comrade the Martian Manhunter, and their discussion on how to improve on the design is interrupted by the sudden arrival of the Red Tornado arriving from Earth-Two. However, before he can tell the Justice League why he has come from Earth-One, the alarm goes off and the Justice League goes off into action telling the Red Tornado not to budge until they come back. They end up in Midway City where they are met by Hawkgirl who takes the JLA to the museum to see that Hawkman has been turned into salt, as well as everyone in the area. They have the police cordon off the entire part of town and Green Lantern erects a cover over the city to prevent the salt statues from being dissolved by rain.

Batman spots a man fleeing the scene and goes after him, his attempt at apprehending the man is interrupted by a gang known as the Gruesome Ghouls . Their leader is interested in knowing that the man Batman is after was responsible for everyone in the city being transformed into salt wants the man for himself and they try to jump Batman. The Caped Crusader is saved from a pile on when the Flash intervenes. Batman takes the man he was after and brings him to Justice League headquarters. There, the man introduces himself as Marmaduke Mantick, who was a collected of ancient parchments. He explains that one night he followed the instructions for an ancient spell and summoned a Chthonic demon. The Demon told him to go to Midway City and touch the Philosophers Stone that they had on display there. When Mantick went there he found himself drawn to the stone and broke into the display case to take it. He would be opposed by Hawkman and during the struggle Chthonic demons would appear and they changed everyone but Mantick into salt statues. Finishing his story, Mantick tells the heroes that the Philosophers Stone can be used only once every thirteen days. As such the Justice League decides to keep Marmaduke under constant watch as the cordon of Midway City continues.

Later, Hawkgirl is captured by the Gruesome Ghouls who send a letter to the Justice League demanding that they turn over Mantick to them in exchange for Hawkgirl. The Justice League sends Superman disguised as Mantick to the meeting place and allows himself to be "captured" before revealing his true identity and making short work of the crooks, freeing Hawkgirl, and turning the gang over to the police. The Justice League then spends the rest of the thirteen days resuming their normal civilian lives.