UFO Report - "A conspiracy of men who cooperated with alien beings to create human alien hybrids." 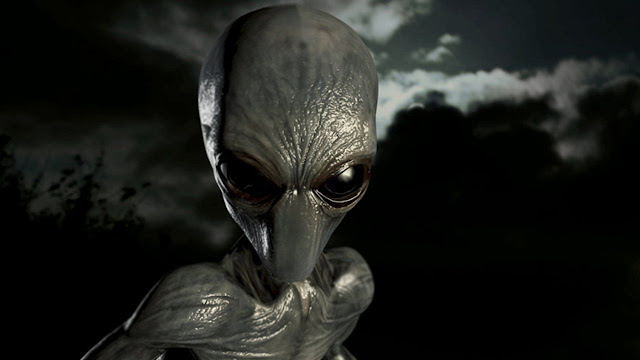 Dang It! I hate it when stuff from the X-Files turns out to be true!

Background from The X-Files Wiki:

A hybrid is the genetically manipulated product of alien and human DNA as part of the colonization project run by the Syndicate. Some humans became hybrids via gene therapy while others were conceived through a hybridization process.

When the Syndicate concluded a sinister alliance with the alien colonists in 1973, an alien fetus was given to them in exchange for family members to be used as test subjects. This fetus granted them access to alien and allowed them to create a hybrid race between man and alien, paving the way for colonization. A scientific method was also taught so they could produce successful specimens; the Syndicate had previously invited Nazi and Japanese scientists to participate in early experiments using alien DNA taken from corpses found at the Roswell crash site in New Mexico with disastrous results. The alliance implied that Syndicate members and their families would be spared as they became hybrids and this hybrid race would become the colonists’ slave race. But the Syndicate didn’t simply agree to this; they secretly planned to elaborate a vaccine against the black oil so they could resist the hegemony. Based on the work of Russian geneticists who had found an interesting anomaly in identical twins, the Syndicate’s scientists managed to create healthy hybrid clone series. These clones had a human appearance so they could easily blend in, but had inherited the colonists’ caustic blood and some of their particular abilities such as breathing underwater and fast healing of the wounds. These attributes made them practically indestructible and they could only be killed using a weapon or an alien stiletto inserted at the base of the skull, the colonist race’s only vulnerable point. Some of these clones were produced using female abductees’ ova, others using human fetuses obtained in abortion clinics where Syndicate researchers worked. The embryo would grow in a tank filled with a greenish amniotic fluid until it had reached the desired development stage for the task assigned to the hybrid. 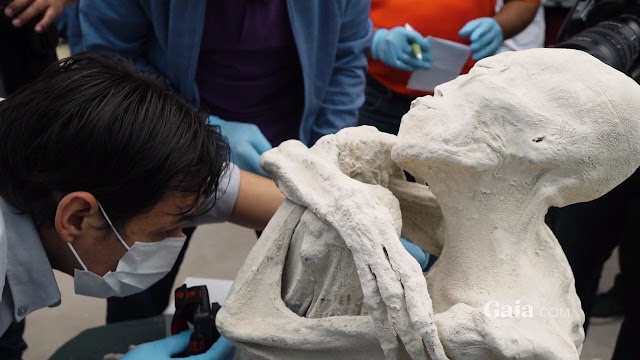 Now check out this gem from Yahoo! News UK:

Self-described ‘researchers’ have made some extraordinary claims about three-fingered mummies unearthed in Nazca Peru – hinting that the creatures may be alien.

The mummies were unearthed in 2015, and have been touted as evidence of ‘ancient aliens’ by UFO fans.

UFO researcher Steve Mera said this week that DNA tests show one of the bodies is 98.5% primate, related to humans, and 1.5% ‘unknown’.

Mera suggests that the creatures might be a new species of human.

Steve said, ‘We can confirm that we have evidence that the Maria body constitutes an incredible discovery.

‘A discovery that may cause us to alter our history books forever. She could be the most important discovery of the 21st Century.

Others are sceptical – pointing to the fact that some of the ‘researchers’ involved in the find are trying to charge people to download information from their website.

The World Congress on Mummy Studies has described the find as a fraud, and calls it, ‘an irresponsible organized campaign of disinformation.’

Nigel Watson, author of the UFO Investigations Manual said, ‘I think the whole saga of finding these mummies is laughable and they are very probably fakes.

‘If you think about it how would humanoid aliens with three long fingers survive? They would be incredibly clumsy and it seems doubtful they would be capable of making a cup of tea let alone a flying saucer.

‘It also doesn’t look good that this Earth shattering news was originally fed to us via a website you have to subscribe to, rather than through officially recognised scientific channels.

‘At the end of they day this is fake news delivered in a slick fashion to indulge our fascination with ancient aliens and UFOs.’

I think that the folks over at Ancestry DNA could solve this mystery in a jiff! Okay we have your results ... your 75% South American Native ... 20% Northern African ... and 5% Gliese (A planet 22 light years from Earth). According to the family tree you submitted online and your DNA we determined that your family migrated from Gliese to Peru in 300 BC. Your test also revealed that you may be <2% Kepler-22b ... but we can't confirm that with any accuracy.
By Ken Hulsey at June 26, 2018