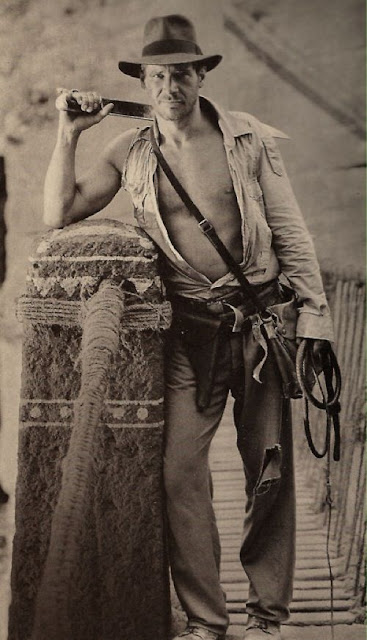 They had better hurry up because Harrison Ford isn't getting any younger!

Here are some possible titles for the upcoming Geriatric Jones film:

Those looking forward to Disney's INDIANA JONES 5 will have to wait just a bit longer to set out on another adventure with Harrison Ford's bullwhip-wielding rogue, as the studio has announced that the film has been moved from July 10, 2020 for a July 9. 2021 debut. As it happens, the film was supposed to shift into production in the United Kingdom in April of 2019, though scheduling conflicts and scripting issues seem to have "kalimaed" those plans. Never fear, though. Spielberg is still set to direct and Ford is reportedly looking forward to going on yet another dangerous mission as Disney plunders the series for more cash.

Furthermore, INDIANA JONES 5 isn't the only film from the studio that's being moved. As a part of the Indy announcement, the House of Mouse has also revealed that Dwayne Johnson's JUNGLE CRUISE will now set sail in theaters on Oct. 11, 2019, while Angelina Jolie's MALEFICENT 2 will cast a spell in cinemas on May 29, 2020. Furthermore, MARY POPPINS RETURNS starring Emily Blunt will now open on December 19th as opposed to its original Christmas Day release date.

Adjust your calendars as needed, and hold tight for when Disney reveals more about INDIANA JONES 5: THE SEARCH FOR MORE MONEY. Heh, that's not really what it's called, but I can't resist a good SPACEBALLS reference, and neither should you.