Things You Didn't Know About "The Mysterians" 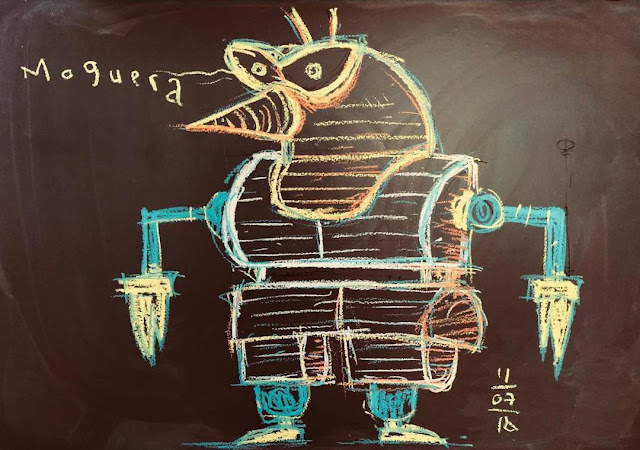 Beware! Multi-colored aliens have come to Earth with a giant drill-nosed robot to mate with our women and buy up all of our real estate.

The Mysterians  is a 1957 Japanese science fiction film directed by Ishirō Honda and stars Kenji Sahara, Yumi Shirakawa and Takashi Shimura. The film begins with a giant fissure destroying an entire village. This leads to an investigation whereby the source is discovered to be Moguera, a giant robot, who is then destroyed by the military. The remains are analyzed and discovered to be of alien origin. Shortly after, an alien race known as the Mysterians arrive, declaring they have taken some Earth women captive and that they demand both land and the right to marry women of Earth.

For The Mysterians, producer Tomoyuki Tanaka recruited Jojiro Okami, a science fiction writer, to develop the story. Honda later elaborated that he wanted the film to differ from both Godzilla and Rodan and to make it more of a "true science fiction film," one to promote peace and understanding between cultures. The film was popular upon its release in Japan, where it was among the top ten grossing domestic productions of the year. Contemporary reviews from Western critics in the Monthly Film Bulletin and Variety praised the special effect work but criticized the plot as confusing and juvenile, respectively. - Wiki

At the end of the English-language US version, the last Mysterian saucer is seen ascending into the upper atmosphere. In the original Japanese-language version, this is revealed, through dialog, to actually be an Earth satellite that is launched to monitor the Mysterians and prevent a future attack.

This was one of the first Japanese productions to be shot in anamorphic widescreen. Tôhô Kabushiki Kaisha, which called its anamorphic process TôhôScope, specifically made this film to show off the new process. Part of Akira Ifukube's battle score was used on the TôhôScope logo, which appeared at the beginning of the Japanese-language prints.

The USA premiere of the Mysterians, Aka Chikyû Bôeigun (tôhô, 1957) was on October 30, 1958, at the United Artists Theater in downtown Inglewood, California. A giant 6-foot-tall cardboard standee poster of Mogera was placed outside of the theater, facing the street. It was released by RKO and Warner Bros. for that release, then MGM re-released it again in May 1959. It is available on VHS, Laserdisc from Tôhô, and on DVD from Tokyo Shock, 2005. The reissue DVD has a re-recorded English-language soundtrack with new voice actors and is not the original 1958 USA release soundtrack that had Paul Frees as the voice of actor Takashi Shimura, who played the veteran scientist Dr. Tanjiro Adachi, as he also did for this actor in voiceover work in Godzilla: King of the Monsters (1956) and Mosura (mothra) (1961).

The Mogera suit, originally worn by Haruo Nakajima, was, after filming, kept in storage in one of Tôhô's visual effects sound stages until 1974, when it was destroyed in a fire on the lot, caused by a pyrotechnical accident during the filming of Nosutoradamusu no daiyogen (1974).

In the original Japanese-language version, the aliens are called Mysterians (rendered in katakana as Misuterian). When he visited the United States, special-effects director Eiji Tsuburaya was surprised to discover that the term Mysterians was well-known. It had also been used in the English-language dubbing, and the film had even been released in the United States under the title "The Mysterians."

Mogera, the giant robot that was added to the film, was created to be a Godzilla-like mechanical monster, including spines along the back and a large tail. In the final edit of the film, most of the selected shots hide the fact that the robot does have a tail.

An early concept of Mogera was of a four-footed mecha, more along the lines of a mole. The name Mogera was based on the Japanese word for mole ("mogura"), which was not in the original script, but was added at the insistence of producer Tomoyuki Tanaka, who felt the movie needed a giant monster.

Japan's Self-Defense Forces gave assistance to this production and allowed the filming of military equipment and personnel. Through them, the production was also allowed to shoot TôhôScope-wide footage, especially of military aircraft, at United States Military installations in Japan. - IMDB 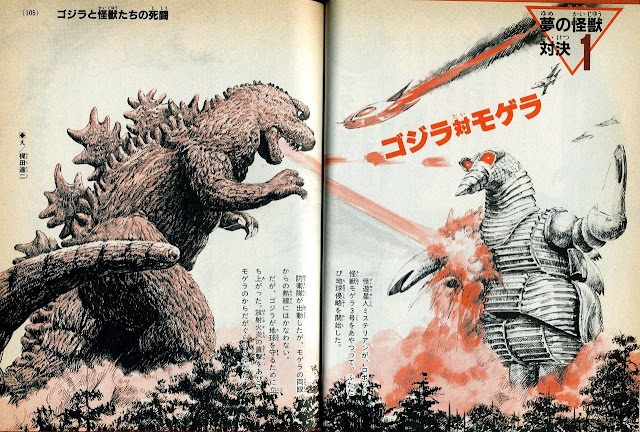 Here is a outline for the story:

"The story of GODZILLA Vs. THE MYSTERIANS involved a rogue faction of the aliens from the original 1957 flick, setting up shop under the Nevada Desert. Over the years the Mysterians conducted experiments on the local flora and fauna in their labs to try ,and combat the conundrum of their race's sterility. The results were a menagerie of genetic, and cybernetic abominations that brought them no closer to their goals of correcting their sterility. The mightiest of which, Hira-Jin, part-man, part-Gila Monster, part human.

The Mysterians hit upon the idea that Godzilla's unique biology might be the key to the answers they seek. So a ship is dispatched to Monster Island to capture the King of the Monsters. The mission is successful, Godzilla is captured ,and brought back to the base. Unfortunately, drawn into the affair are Anguirus and Rodan who track Godzilla to the Mysterians' base in the Nevada desert, which takes them through Las Vegas. The Mysterians unleash Hira-Jin against the kaiju, and large tracks of Vegas end up devastated in the resulting battle." - Toho Kingdom

Wow there is a lot to process there. I think that if you took out the half-human-half-gila monster thing you may have had something ... maybe.